When Macomb, Illinois residents watch NEWS3 newscasts on their local Comcast cable channel 3, they see a multi-camera news program, rich with graphics, branding, and interesting content. Judging by the quality of this on-air product, they would not suspect it’s a Western Illinois University (WIU) student production. 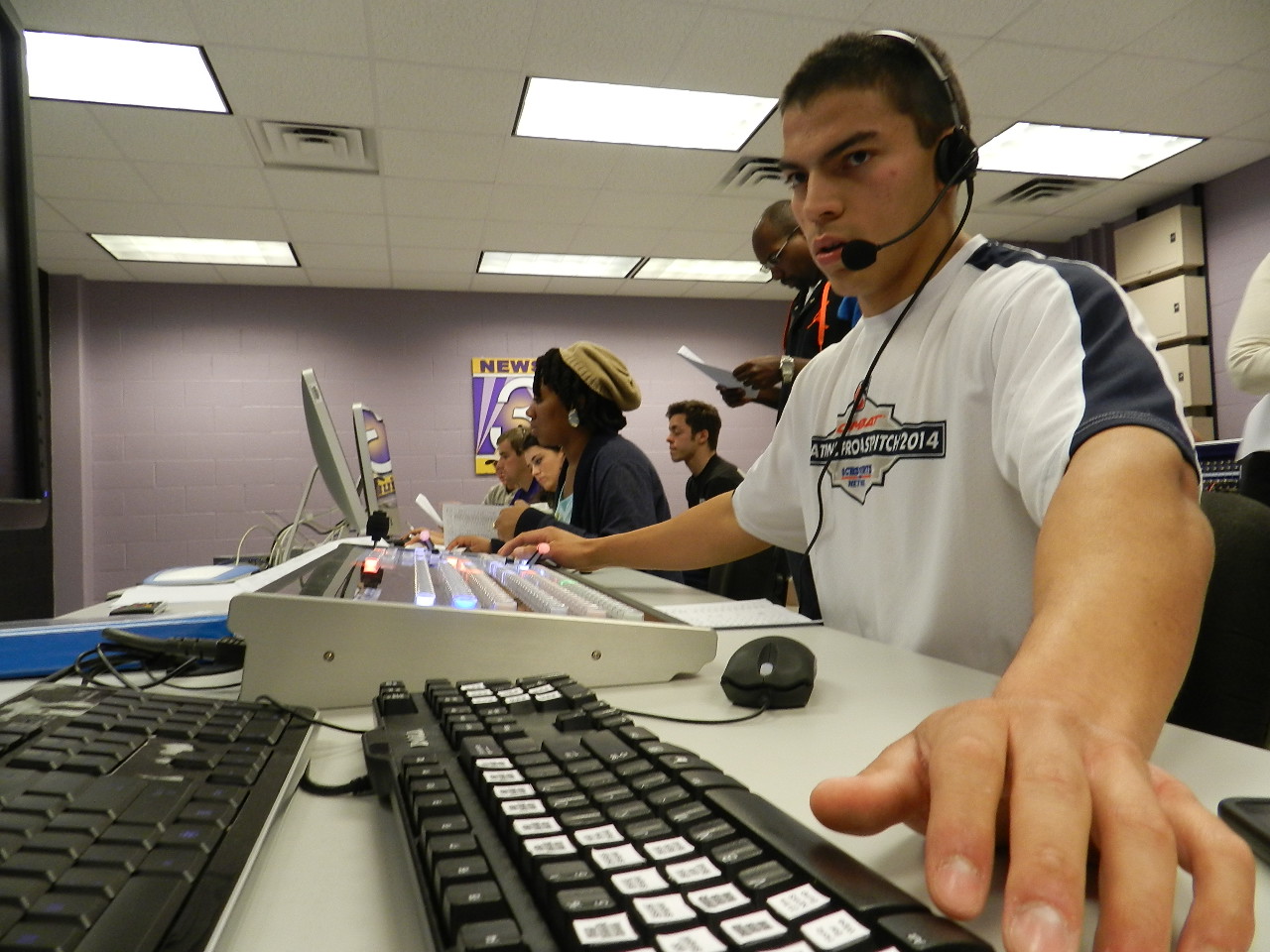 And when national viewers of ESPN3 watched the Western Illinois University-Indiana State football game on November 22, 2014—complete with 5-camera switching, text, audio mix and instant replays—they would never have thought that such a professional live telecast was produced for ESPN by a WIU student crew.

“We’re offering our students real world training and experience that prepares them for professional jobs in the broadcast field,” said Dr. W. “Buzz” Hoon, Chair of the Department of Broadcasting for Western Illinois University (WIU), a public state university in Macomb, Illinois.

As one of the most popular undergraduate majors at WIU, the Department of Broadcasting has three tracks: News & Performance, Sports Broadcasting and Production.  Over the years, the Department’s video production facilities have evolved to a level that rivals mid-market television stations. 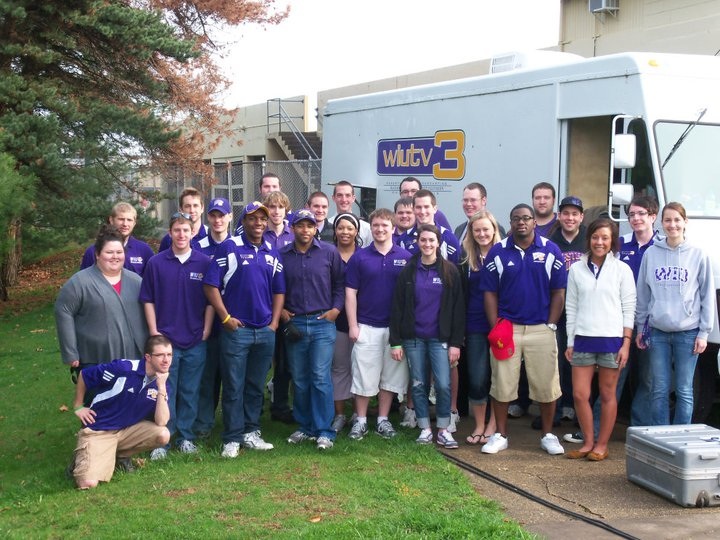 At the core of the facility is video equipment from NewTek, including the TriCaster 8000, an integrated live production switcher that resides in the control room adjacent to the news studio. And WIU’s custom 30-foot HD sports truck is equipped with a smaller TriCaster 855 integrated live production switcher as well as a NewTek 3Play unit for instant replay and LiveText system for live graphics. The equipment was chosen because it’s compact and economical yet powerful and reliable.

“TriCaster systems are increasingly being used by television stations, video truck and production companies,” Dr. Hoon said. “As our students master these systems, including multi-camera HD switching, live graphics and other skills, they’re in demand by local broadcasters looking for young talent to man various crew positions for their live shows.”

One case in point is Mario Calero, a junior in the broadcasting department who recently served as a freelance technical director on approximately 12 games produced for Comcast SportsNet/Chicago, 4 of which involved working on a TriCaster 855. Produced by a local production company for Comcast SportsNet, these four live events were all Illinois High School Association (IHSA) state (women’s) volleyball finals.

“I was able to walk right into this professional setting, sit down and operate their TriCaster to produce a live sports show,” Calero said. “After the first show, the director told me we definitely want you back for more shows because we need more people who are as comfortable with these professional tools as you are. There’s no way I would have been as comfortable in this situation if I hadn’t been working with the TriCasters here at WIU.”

One of the key factors swaying Calero’s decision to attend WIU was the fact that the broadcasting program featured top of the line TriCaster and 3Play systems. Since his high school offered the TriCaster, including the 855 model, which was available his senior year), he developed an affinity for the user-friendly technology that has greatly expanded at WIU.

“I’m now able to program macros on-the-fly for our live local newscasts. For complex mix/effects, a macro reduces five or six keystrokes to just one,” Calero said. This macro was used for a news story announcing the closing of a major retail store in Macomb. There was live video of the store running on the left side of the screen, within a branded animation background, and there were bullets detailing key store closing information overlaid on the right side.

Calero is one of many students who work in various production positions for WIUTV3’s NEWS3 live half-hour local newscasts, including Live at 4, which airs at 4pm central time on Tuesdays and Thursdays, and Good Morning Macomb, a topical magazine-style show that currently airs Wednesday mornings at 9am central. 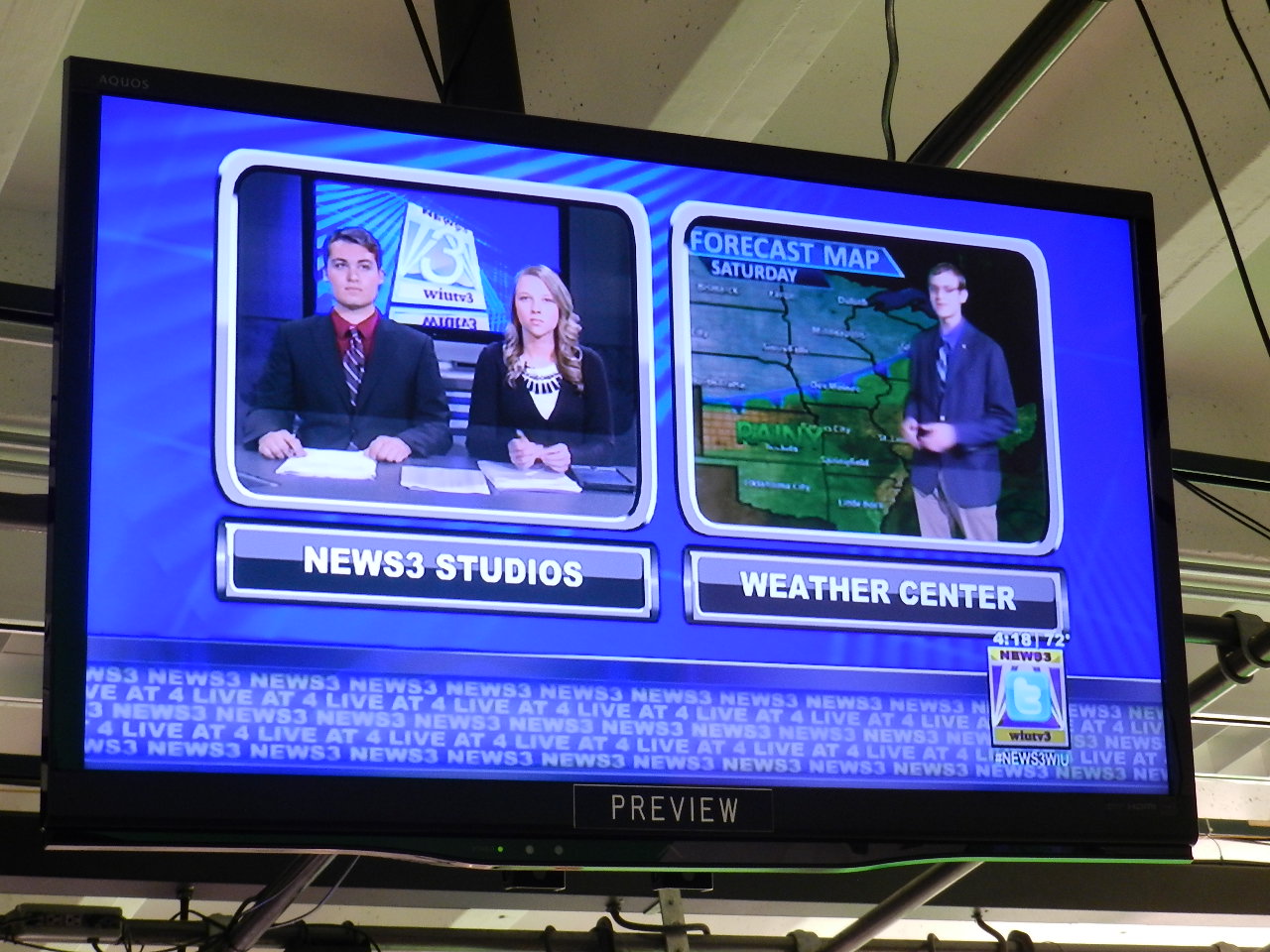 The Live at 4 newscasts are part of BC-415 Broadcast News 2, a class for juniors and seniors in the major, while Good Morning Macomb is an elective open to all broadcasting students. All three newscasts are produced in 1080i HD, and viewed in 720p online, but they air in SD on Comcast channel 3. WIU contributes the signal directly to Comcast’s local head-end.

TriCaster also streams the newscasts live via YouTube, where they’re also archived for video on demand. It also simultaneously records the programs and portions of this content are repurposed as standalone news stories accessible on the Department of Broadcasting’s website, NEWS3WIU.com as well as its Facebook page.

“Our students are passionate about going into this field and I treat them as pros,” said Jasmine Crighton, the News Coordinator for WIU’s Department of Broadcasting. Prior to joining the WIU staff in 2012, Crighton worked for KVVU-FOX5 in Las Vegas where she won an Emmy from the National Academy of Television Arts & Sciences in 2008 for Outstanding Technical Director for Speedway Saturday Night. She also worked as the producer of NEWS9 Sunrise, a popular two-hour morning show airing on WTOV9 in Steubenville, Ohio.

“It’s been helpful as a teacher to know what the industry expects,” Crighton said. “WIU’s production environment really parallels professional broadcasting. We strive to make this setting as realistic as possible so our students are prepared to hit the ground running when they leave here and find themselves working for a news station.”

Like in the real world, students must audition for the news, sports and weather anchor spots, or demonstrate proficiency in whatever skills are required for various technical positions.

In the news studio located on campus in Sallee Hall, three JVC-790 HD studio/field cameras on tripods help the students learn pan, tilt, zoom and focus skills as well as adjusting the iris and other picture settings. The NewsKing newsroom computer system, which is used to plan the newscasts and rundowns, serves as the studio teleprompters. And weather reports are delivered as PowerPoint presentations.

While the TriCaster can control the cameras remotely, Crighton said it’s important for the students to learn to operate them. Mario Calero adds, “One of my next projects is to use the TriCaster’s proc amps to paint the cameras. There are settings that can improve flesh tones and make the picture look more vibrant.”

TriCaster’s virtual set capabilities also enable the news team to expand the look and variety of set areas within the studio. While they don’t produce immersive virtual set environments, these virtual set graphics are chroma-keyed onto green screen backgrounds or displayed on big-screen monitors behind the talent to serve as backgrounds for stand-up news and sports reports.

Crighton and Calero agree that broadcast design is critical to producing an appealing on-air product that attracts viewers. And compared to the compact 2-M/E SD switcher they previously used, the TriCaster 8000 has elevated the look and feel of their local newscasts. Live at 4 has a bluish toned graphical look while Good Morning Macomb sports bright orange/yellow color palette.

The newscasts also feature look-live packages, which are news reports recorded in the field and made to look live as they play out of the TriCaster during newscasts. In other field reporting, Mario Calero and three other students took field cameras to the site of a nearby tornado to cover the devastation, and while there, interviewed the Governor and other officials that were there to assess the damage. 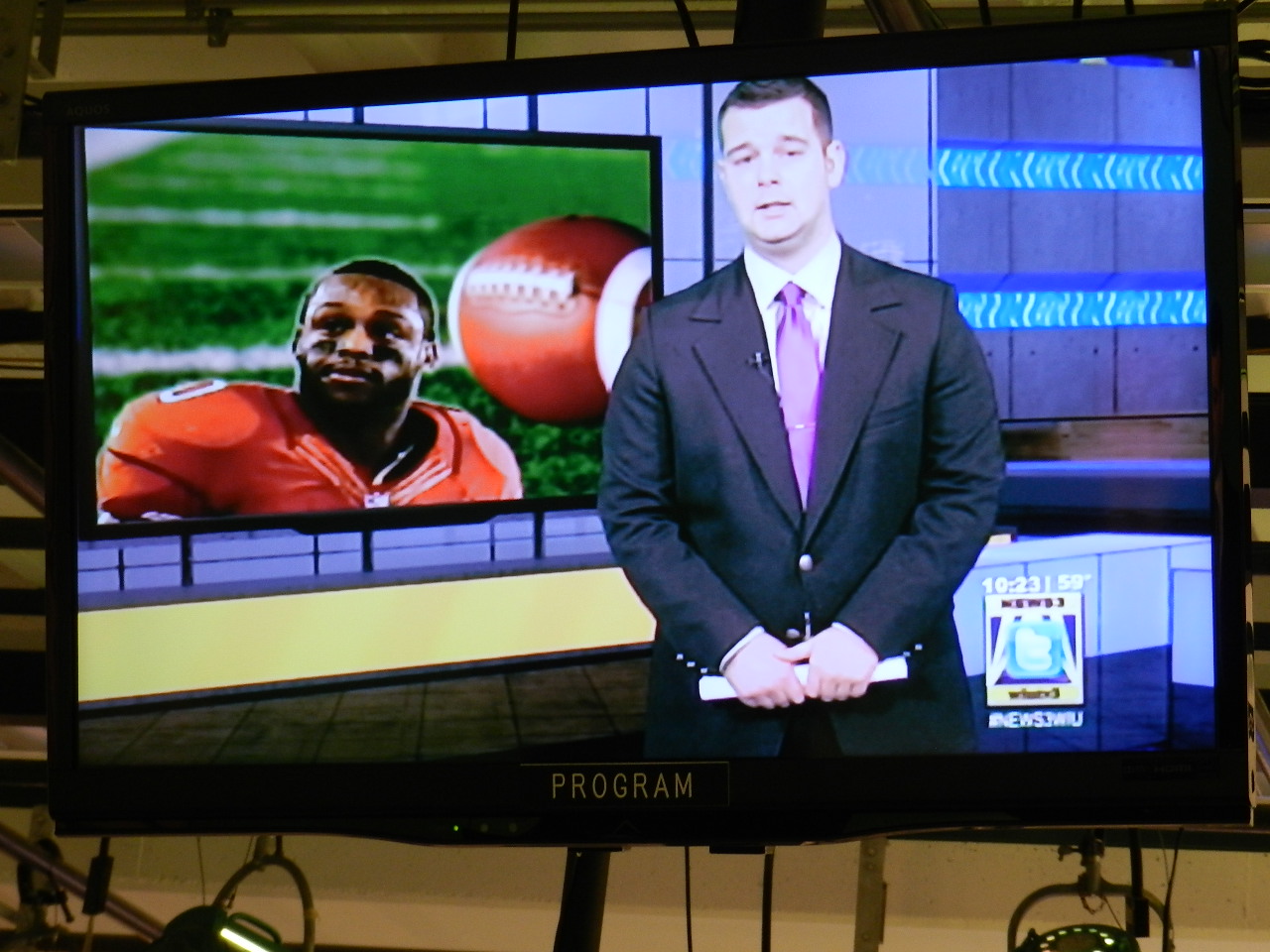 The live sports productions are streamed via the WIU athletics website (goleathernecks.com), carried live on Comcast channel 3 and the signal is also sent to the big-screen HD video board at Hanson Field, where the Leathernecks football team plays. The crew parks the truck outside the campus venues where sporting events are taking place and then run fiber optic cabling wherever needed.

For football, two field cameras are used in handheld mode on the sidelines and three are used on tripods from strategic vantage points. The TriCaster 855 and 3Play, which are compact units that are rack-mounted inside the truck, are used to switch the cameras and produce replays respectively. Also rack-mounted is the NewTek LiveText system, which is used to generate live sports graphics, such as scores and other game statistics.

“We usually produce about 20 sporting events per semester, which is 40 per year, all thanks to our specially trained student volunteers,” said Dr. Hoon. “One of these was the big Thanksgiving weekend game against Indiana State that was delivered via satellite to ESPN for broadcast on ESPN3. This broadcast introduced our Division 1 football team to a national audience.”

In reality, WIU’s ability to provide this challenging live broadcast, complete with ample replays and highlights, enabled ESPN to carry a game they normally wouldn’t have committed a sports truck or other production resources to cover. Since Macomb, Illinois is in a small TV market (Quincy market #170), there aren’t a lot of local stations and network affiliates serving the area.

“The plan is to absolutely produce more football games for ESPN and other networks,” he added. “It’s great visibility for our team, and whether we win or lose, if our broadcasting students do well, that’s all that really matters.” 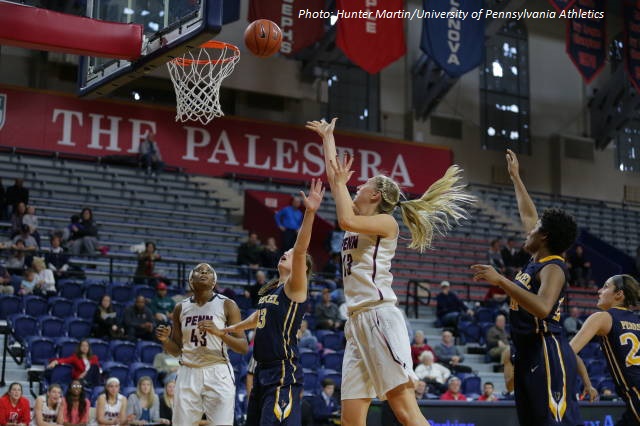 How To Videotape or Interview a C-level Executive (Part 1)