There is no shortage of theories when it comes to explaining the significance of Muscle Shoals, Alabama in the history – and future – of American-made music. It’s one of four towns clustered together in an area known as “the Shoals” with a population of less than 15,000, a small town by any standard but one, and that’s musical legends. Aretha Franklin, the Rolling Stones, the Staple Singers, Otis Redding, Lynyrd Skynyrd and the Black Eyed Peas among many others have made the trek to Muscle Shoals and, while there, cut recordings that went on to become a part of pop music’s canon.

But of all places where such a phenomenon could occur, why Muscle Shoals? Some say the nearby Tennessee River holds in its currents the eternally potent strains of the Cherokee’s forced removal from the region in 1838. Others credit the area’s notoriety for fearlessly – and successfully – mixing and matching tempos and traditions to its proximity to other musical capitals: Nashville, country’s headquarters, and, across the state geographically but in many ways a world away, the home of the blues, Memphis.

Randy Bruce lives in Florence, one of the four towns that comprise the area he’s called home for most of his life. He teaches digital media and recording arts at Florence High School and is himself an accomplished musician. He isn’t particularly interested in identifying what inspires the music that put his hometown on the map. His main interest is keeping it there by showing the world that local virtuosity wasn’t a fluke with a limited run back in the 1960s and 1970s: It’s ongoing.

“What I set out to do was to push things forward so that our young artists will be seen and heard the world over,” says Bruce. “I was looking for a way to showcase where the next generation is taking the music, to give the world a chance to hear how our heritage is influencing our musical future. I believe it’s important.” 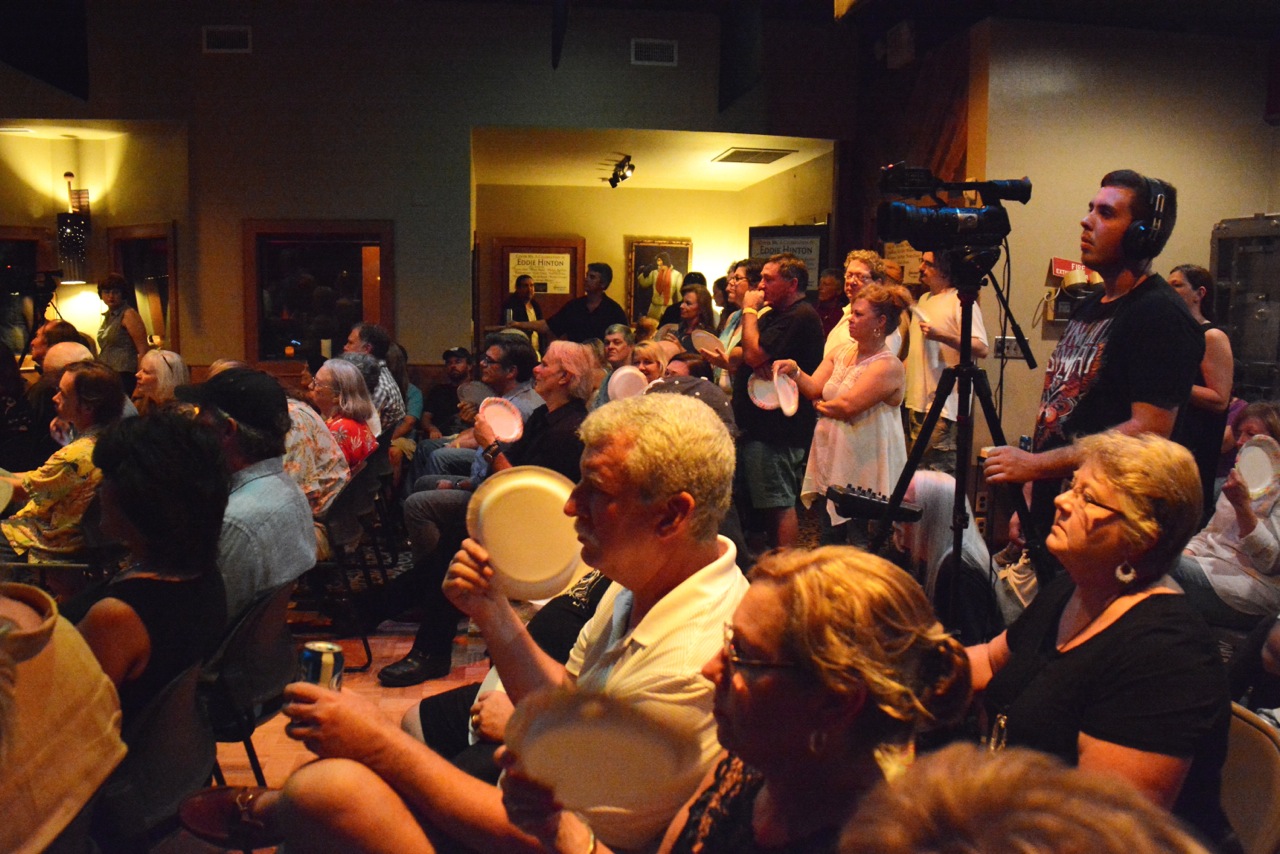 Important indeed, but also expensive, and time-consuming and cumbersome. “There were a lot of us who wanted to share the talent of Muscle Shoals with the world,” Bruce recalls, “but in addition to the costs being prohibitive, when you have to edit by hand, producing something takes forever.”

But a series of seemingly unrelated occurrences yielded a solution to those challenges.

To begin with, to better prepare his students for future study and careers, Bruce introduced state-of-the-art but very affordable video production technology.

Then, in September 2013, a documentary about Muscle Shoals was released to critical acclaim. The film rekindled interest in the area for many people, including Johnny Depp, who has begun developing an HBO series about the lives and legends that have intersected beneath the spell of the music.

Next, a concert was organized at the NuttHouse Recording Studio to pay tribute to Eddie Hinton, an acclaimed songwriter and session musician who was prominent from the mid-1960s through the early 1970s. The studio had hosted previous concerts, small and intimate affairs recorded before an audience of 40 people packed into a studio. But the quality of the recordings, in the opinion of many, was lackluster.

The timing of the Eddie Hinton tribute, according to Bruce, could not have been better. Since the film’s release, Muscle Shoals had crept back into the public’s imagination; many of the musicians slated for the Hinton tribute had experienced a boost in name recognition as a result of being featured in the documentary.

Last but far from least, Bruce’s students had by that time become skillful creators of quality video content.

“In June 2015 we were invited over to shoot and produce the tribute concert program,” says Bruce. “We did it and it worked really well.”

Not surprisingly, the team of student producers was asked back. 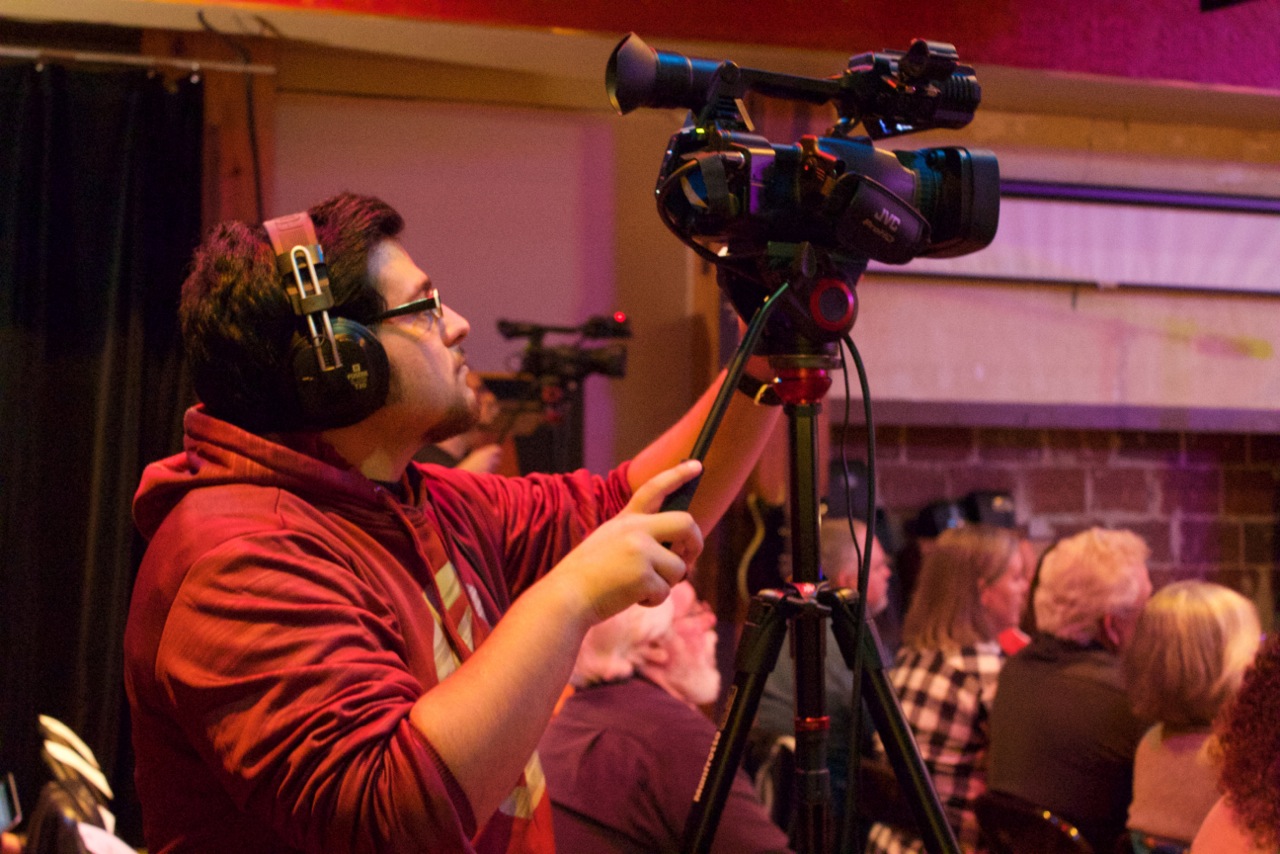 Like the music that made Muscle Shoals famous, the workflow Bruce and the students assembled is deceptively simple. Core components include three JVC600 camcorders, a GoPro [Hero3+ Black Addition] action camera and the TriCaster 460, a multi-camera production system by NewTek that Bruce’s students mastered in the classroom and into which presets have been programmed. The entire system fits easily into the back of an SUV.

The setup is straightforward. “The band plays in front of the engineering booth,” he says. “We use one center and two side cameras. We put the TriCaster in a booth off to the side where it’s quiet.”

All of this happens very quickly. “Thirty-five to 40 minutes and we’re ready to record anything,” Bruce says. “You just push a button on the TriCaster 460 and you’re in business.”

A System that Supports Creativity

Bruce says that the affordability of the NewTek technology was a deciding factor. “If the TriCaster 460 weren’t so affordable, the students simply would not have been able to attain this kind of real-world production experience,” he says.

Almost as important, Bruce says, are the ways in which the workflow he’s assembled make it easier to quickly put together a professional-grade program. “There’s a lot you can do on the fly,” he says.

Graphics are one of the functional areas he cites as an example. The LiveText utility makes it possible to build titles and graphics on a laptop and then send them directly into the TriCaster.

This enables the easy creation of visual features such as network-style scrolls, crawls, title pages and lower thirds. It’s also very flexible, according to Bruce. “If a new person comes on the program who you weren’t expecting you can use LiveText to change the name right there on the spot,” he says. “The graphic capabilities make it possible to respond to changes really quickly and still look very professional. It’s very well thought out.”

Although the concerts are currently recorded and then posted to a YouTube channel, the first few sessions that Bruce and his students produced were streamed live. “The TriCaster’s streaming functionality is superb,” he says. “It works great regardless of where you’re sending your content. It’s equally simple to record to a drive within the TriCaster, download it and then push it out to wherever you want it to be.”

Bruce sees the ease factor as something that goes beyond convenience. “The system we’re using lets more people be creative,” he says. “It would take forever if you went in there and just shot video and then went back and edited. With our system you can get it right as you do it.”

The end product, according to Bruce, garners a lot of positive feedback. “People respond to how professional it looks, how great it sounds, how well it’s done,” Bruce says. “People often tell me they watch our concerts more than once.”

The viewers aren’t the only ones who are impressed. “The musicians love what we’re doing,” he says. “They complement us on how well our programs are done, which of course makes our students feel good.” 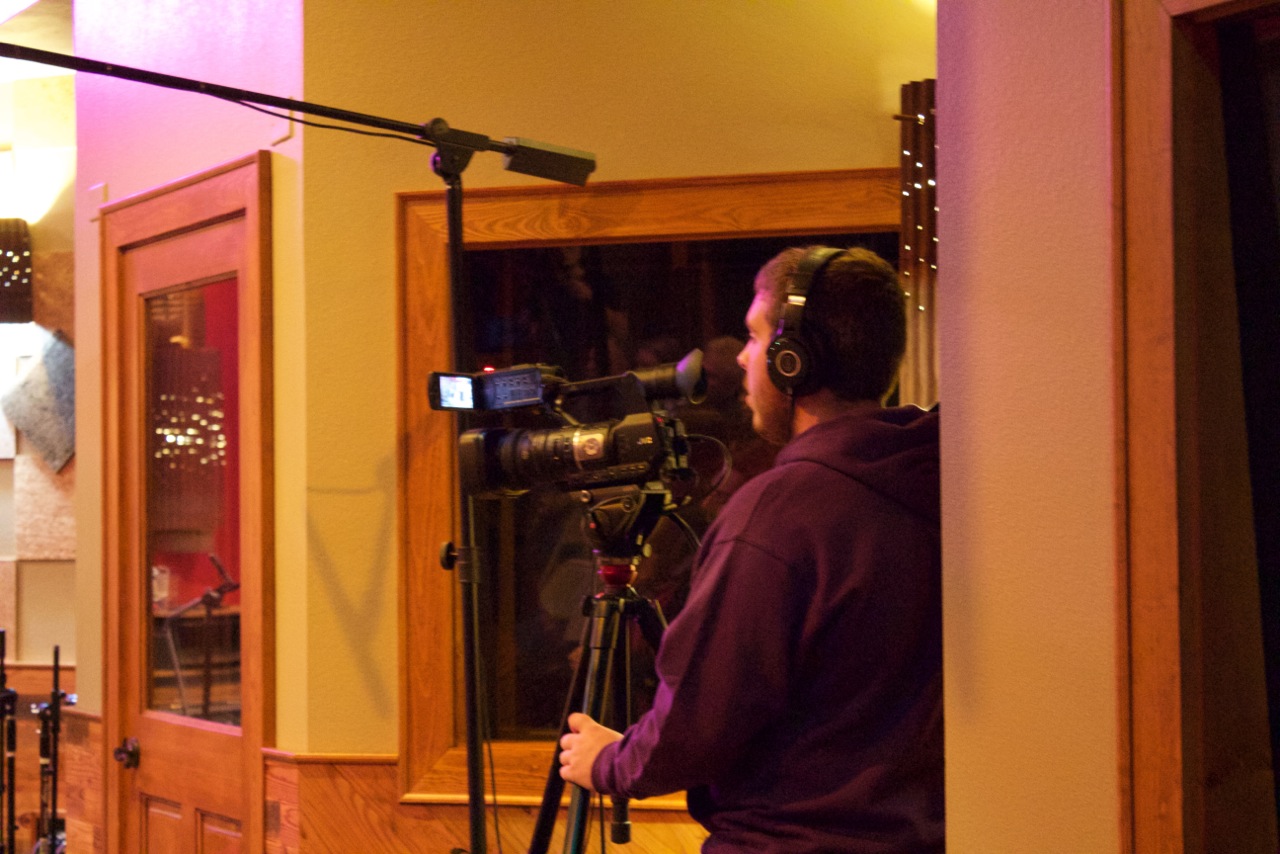 Bruce says that beginning with the very first trip to the NuttHouse, he’s emphasized the fact that producing concerts is not business as usual for a high school media class: It’s a privilege. “They get to be part of a live studio production,” he says. “The students beg to be a member of the crews that go to the studio, but they have to earn the right to participate. They have to be in school and they have to be on task.”

Once at the NuttHouse, Bruce says the learning accelerates. “They learn to switch better, to film better,” he says. “We all learn from that, including me. I’ve learned to write out questions such as how many people are in the band and where are the breaks? I’ve learned that planning is key.”

Learning is important, Bruce says, but so is the link the experience forges between the students and their hometown’s heritage. “They get to meet the artists,” he says, “and for us that’s a cultural point of learning.”

Presenting Muscle Shoals to the World

Most importantly, the system assembled by Bruce and used by his students has proven itself an effective way to underscore the fact that the musical traditions of Muscle Shoals are thriving in the 21st Century. “There is so much talent in this town, but we never really had a media outlet for it,” Bruce says. “Everyone’s aware of the big names who have recorded here, but until the movie came out nobody was aware of our musicians.”

Bruce intends to continue what the documentary got started. “Producing the concert series programs is a great opportunity to teach our heritage,” he says. “By sharing their stories, by performing, our great musicians are creating a way for our students to get involved with the music scene here. Thanks to the technology we’re using, students are gathering those stories and sharing them with people across the world who have never heard of our musicians.” 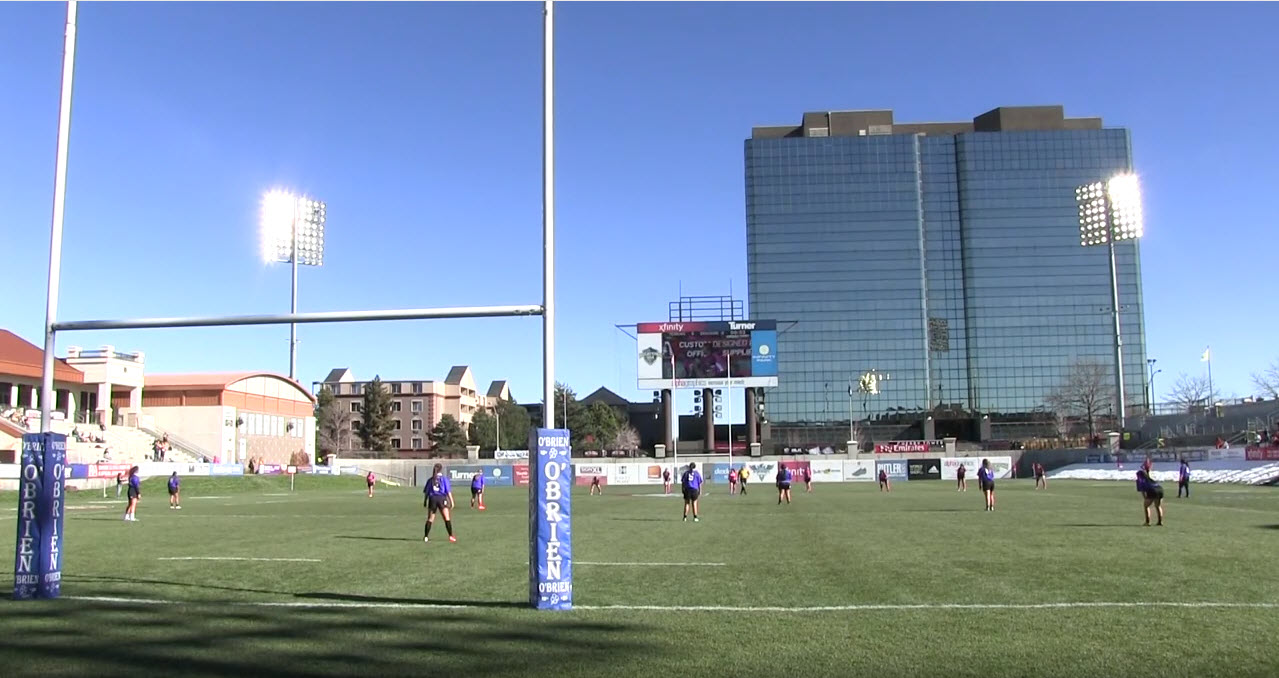 Producing the Show for an Arena Video Board 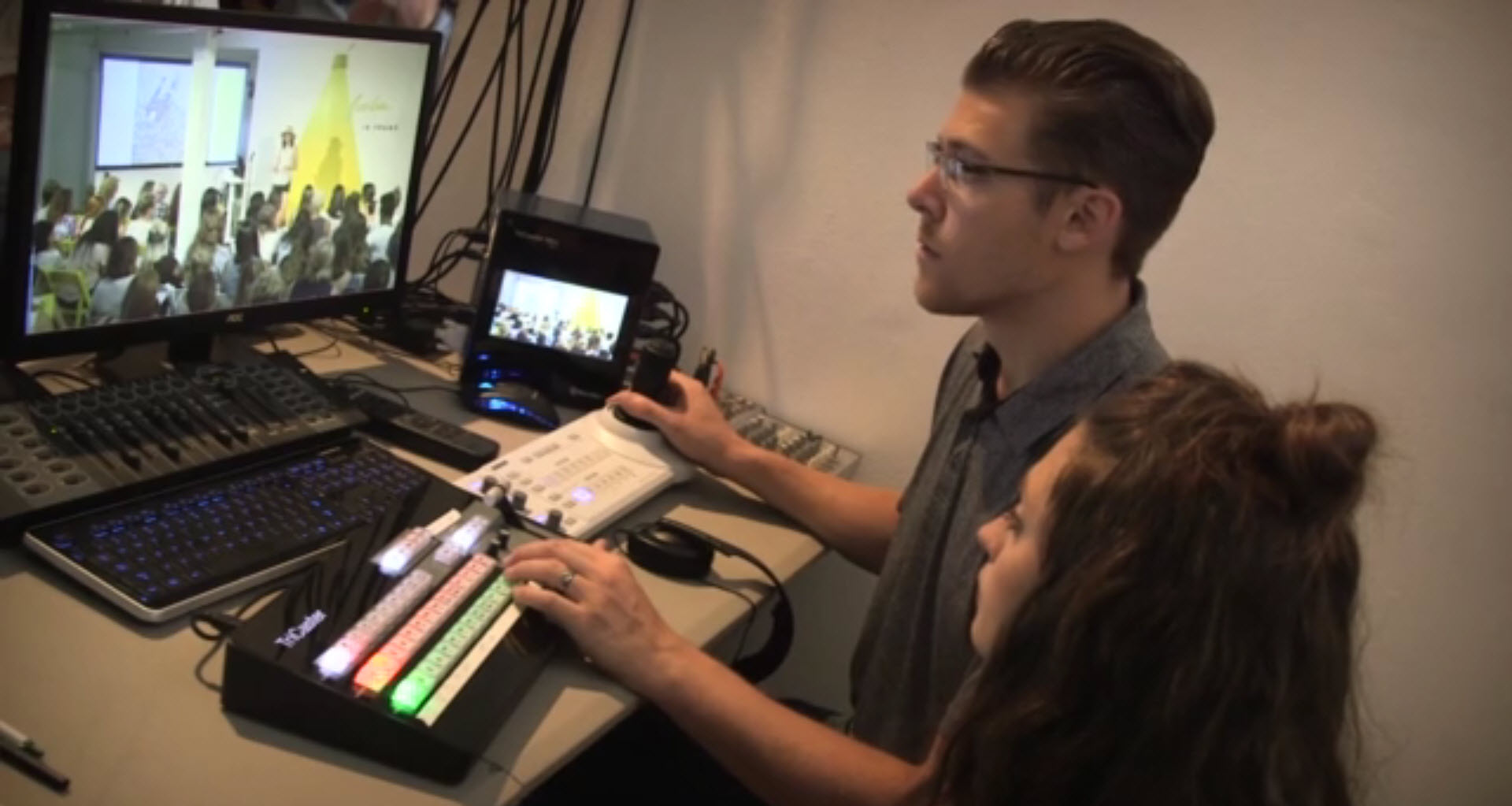 The Yellow Conference: Live Streaming Change to the World