Watch The Crunchyroll Anime Awards - Presented by Devil May Cry V from Crunchyroll on www.twitch.tv

Crunchyroll and Twitch teamed up to produce and stream the live Crunchyroll Anime Awards show from The Folsom Street Foundry and Twitch’s studios, in San Francisco, CA. IP-based live production technologies from NewTek were integral to the effort. These included NewTek’s NDI®, the leading IP technology for bidirectional transport of video, audio and data over standard networks at very high quality and very low latency.

We did the main broadcast at Twitch’s in-house studio, using a NewTek VMC1. Here is where we had a host and a rotating set of guests present most of the awards. Throughout the show, we would check in with The Foundry, where there was a small stage with a live audience and a viewing party. We did interviews with audience members in the crowd, giveaways, and presented the Industry Icon award to a prominent anime producer. - Joshua Shaw, Twitch production team.

The main set used a three-camera setup, with a wide shot showing the host and guests, an angle on the host alone, and an angle on the guests. An additional set used a fourth camera on a “social media host” who added in response from viewers online, gave other information such as prizes to be handed out, contributed commentary and chatted with the main host and guests. Graphics were added from a networked computer station. There was also a lot of b-roll pre-recorded content from the nominated programs available to the production. 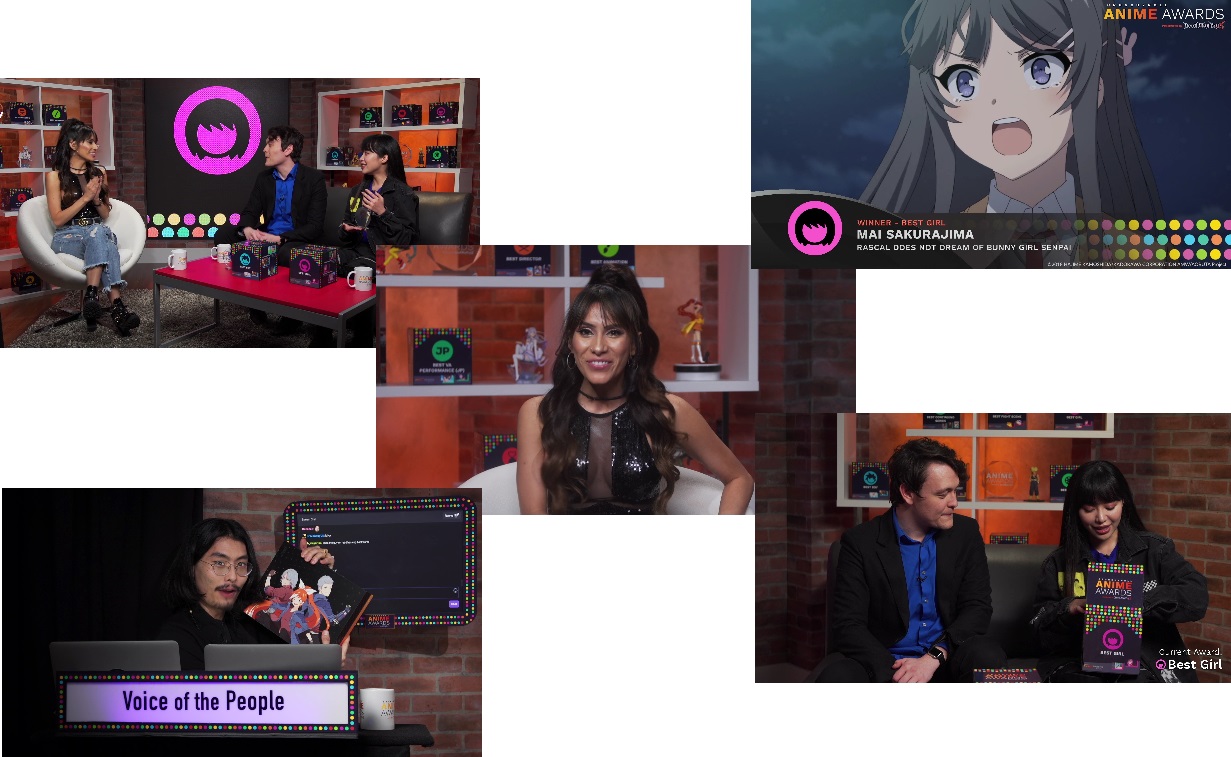 The VMC1 is capable of a massive 44 external inputs in SD/HD/UHD, and is also used in productions by the Twitch team for gaming conventions and trade shows, and for tournaments. Inputs can either be physically attached cameras, SD/HD via SDI inputs on the VMC1 and optional additional input modules, 4K 60p via optional input modules, or they can be NDI sources via the standard 1Gb and 10Gb network ports. Internal sources include media players for pre-recorded footage, buffers for graphics, stills and animations, and more.

The VMC1 capabilities are almost completely created in software, in line with NewTek’s philosophy that the future of video production is software-driven on general purpose computing equipment, rather than the proprietary and expensive single-purpose hardware of the past. An example of this that is important to the rapidly growing industry of gaming tournament live production is that NewTek’s VMC1 interface implements “virtual input” switching technology. What that means is that all 44 inputs in the Switcher interface are “virtual” instead of being literally linked to the hardware inputs on VMC1 and any attached input or input/output add-on modules. Hardware inputs are simply one of the options that can be assigned when configuring these virtual inputs, and any hardware input or NDI source can be assigned to any virtual input, without restriction. Some users have described this as “like having an infinite video router, without the router.”

So, when the virtual input technology is combined with NDI, that means that 44 is not strictly a limit. In practice, any number of players can be accommodated in a tournament production, using a free NewTek NDI application on each system to send their computer display data to the network in real time as NDI streams. All of the NDI streams available on the same network can be swapped among at will on any of the 44 inputs. All 44 can be up to 4Kp60.

If your head is already reeling from the scale this suggests, you should know it only gets worse. Multiple VMC1 units can be accessed from any given VMC1 control surface to scale up production capability. Any input or output on any NewTek IP-based live production system (VMC1, TriCaster® TC1, 3Play® 3P1) unit is also available to assign to any input on any other unit on the same network. All traffic between these live production systems and their associated control surfaces is via Ethernet, with NDI technology applied to transport both media and control. There is quite simply nothing else on the planet that can scale and integrate for productions this way. 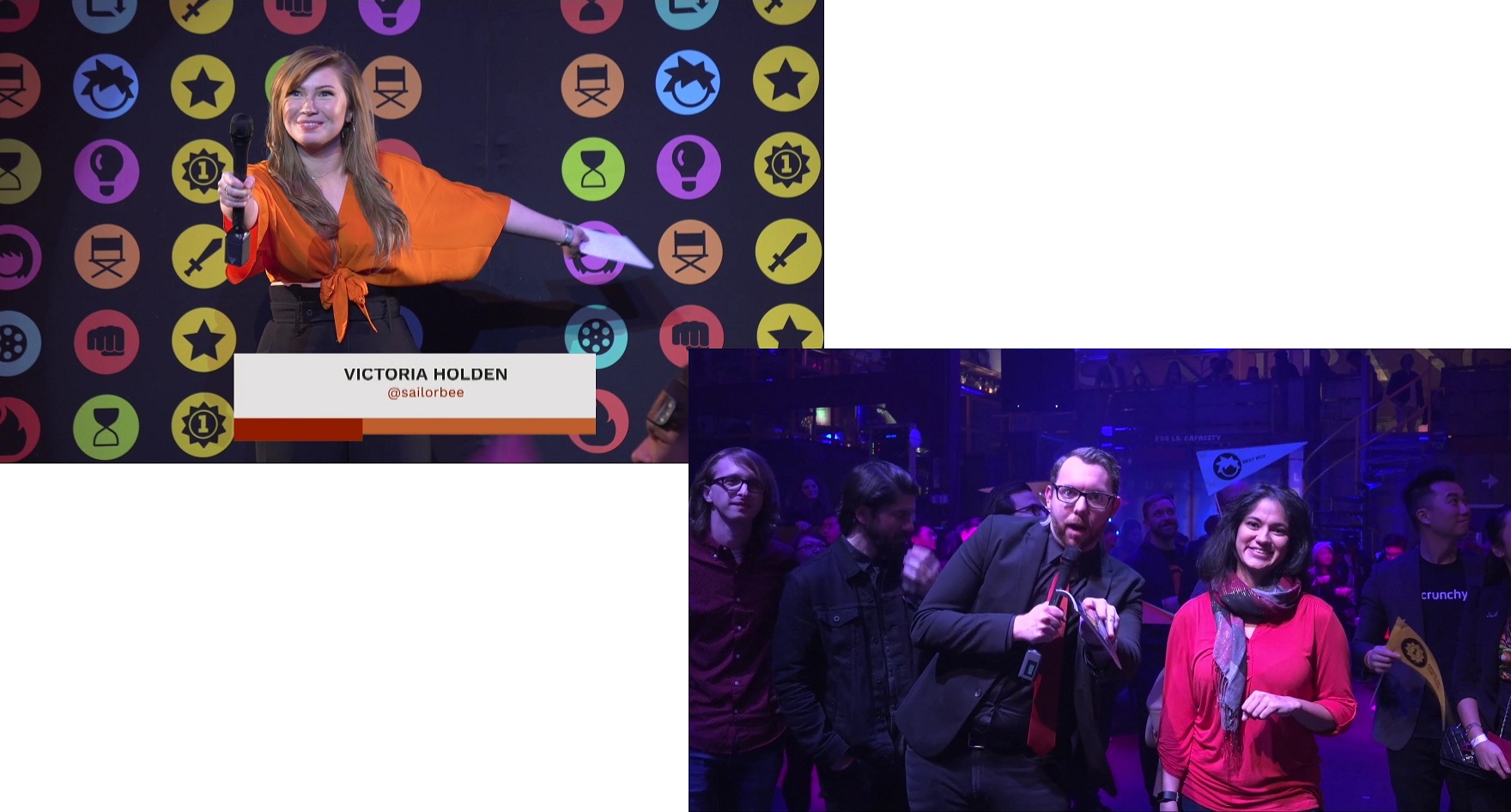 A NewTek TriCaster TC1 SD/HD/UHD 16-input production switcher handled production duties at the Foundry venue. The same capabilities for producing by accessing up to 16 sources at a time from among any number of available NDI or physical sources apply to the TC1. There were cameras in this venue for both covering the hosts when on the stage, and for covering them in the audience for interviews and handing out giveaways.

NDI is intended to work within a local area network. Twitch’s production team bridged the internet between the locations using Medialooks’ Video Transport product, installed on a computer system at each of the two venues. At the Foundry, the Video Transport system received the TC1’s NDI video streams, converted and sent them over the internet. The Video Transport installation at the studio received them, converted them back to NDI and made them available on the local network for the VMC1 system, where they could be used in the live stream. The studio feeds, in turn were also sent to the Foundry where the TC1 showed the main feed on displays for the watch party audience.

There was a concern about the potential latency in going IP across the internet, but this turned out not be an issue:

“We had planned to go to a graphic loop as a buffer, so we could make transitions easier, but after practice, the latency was so low that it turned out that was unnecessary.” - Joshua Shaw.

For more on this story, check out the Medialooks Blog: Video Transport helps Twitch produce the Crunchyroll Anime Awards

Fan of anime and manga? Check out Crunchyroll, the world’s most popular anime brand, boasting a global community of more than 45 million registered users and over 2 million subscribers, and the most complete anime library.