“We’re extremely excited about the potential of our new facility to support web-based, independent dance productions and broadcasts, a big growth area in the entertainment industry. And one of the things we’re most proud of is the technology on display,” said Sammy Oriti, Starwest Studios producer/partner. “We’ve dedicated Starwest as a showroom for the absolute leading edge in broadcast, video, and production technologies…” 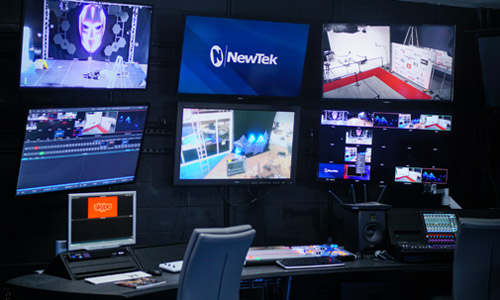 All of the NewTek systems include networking, and support NDI®, NewTek’s royalty-free bi-directional IP technology for transport of video, audio, metadata and communications. Across a standard Ethernet network, the TriCasters can share all their inputs and outputs with each other as NDI streams. The TalkShow can share all four channels with the TriCasters with only a network connection, with no need for direct video and audio cabling. The 3Play can supply its output to the TriCasters via NDI as well.

The automation capabilities built into NewTek production systems allow either of the TriCasters and the 3Play to send commands to any of the systems, leveraging the power of all to a single operator. That same capability also allows for distributing controls to any aspect of the production to other systems and devices whenever desired. The network can be used for this, but also MIDI and other means of communication and control, for unmatched flexibility for the production crew.

Read a profile on Starwest’s state of the art lighting for the new studio: Starwest Studios Partners With LitePanels For Cutting-Edge Dance Broadcast Facility