Proceeding from the previous lesson, on the Session screen we select Live and click the Start Live Production button. 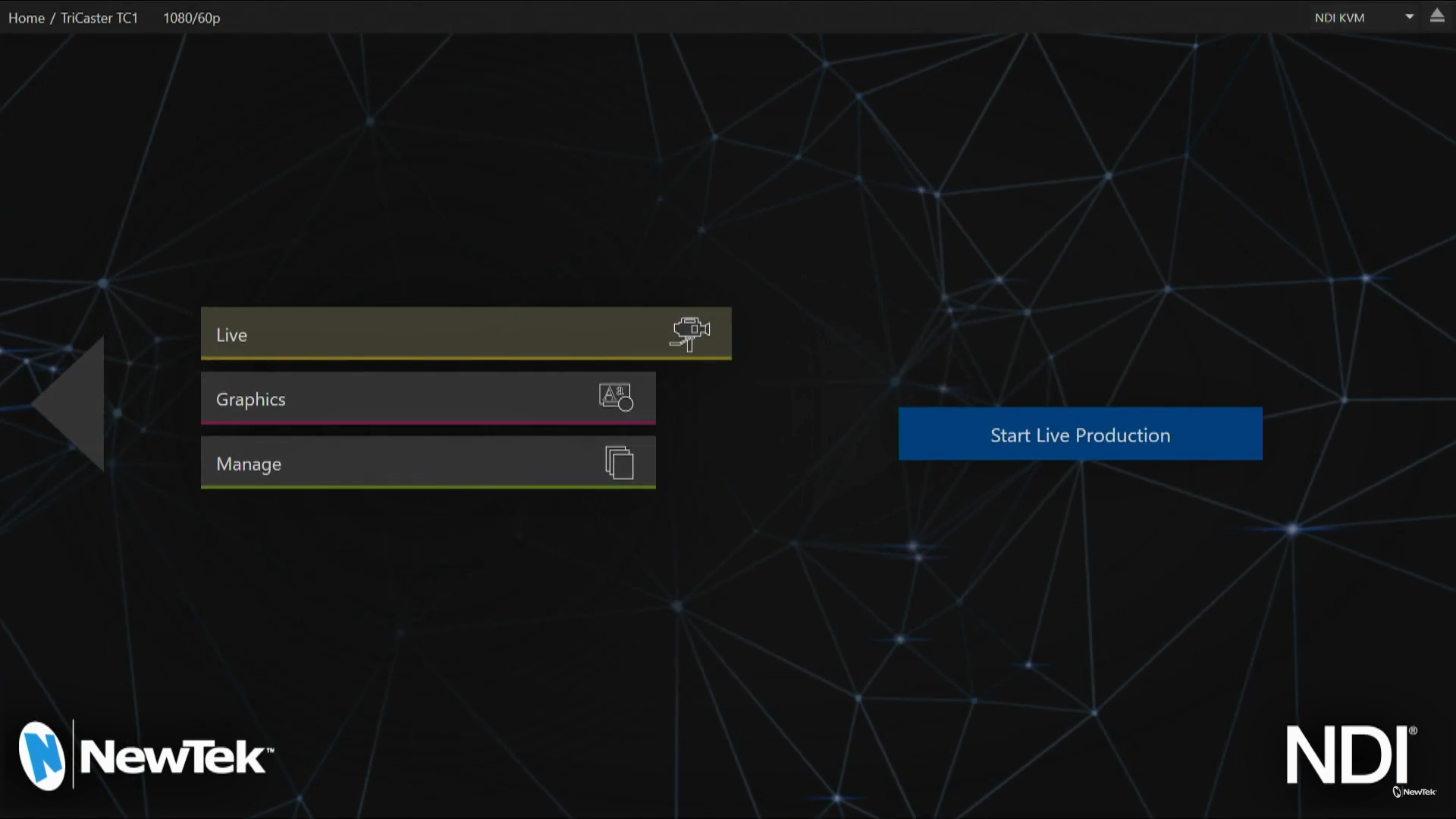 Now we get our first look at the TriCaster® TC1 live production interface. 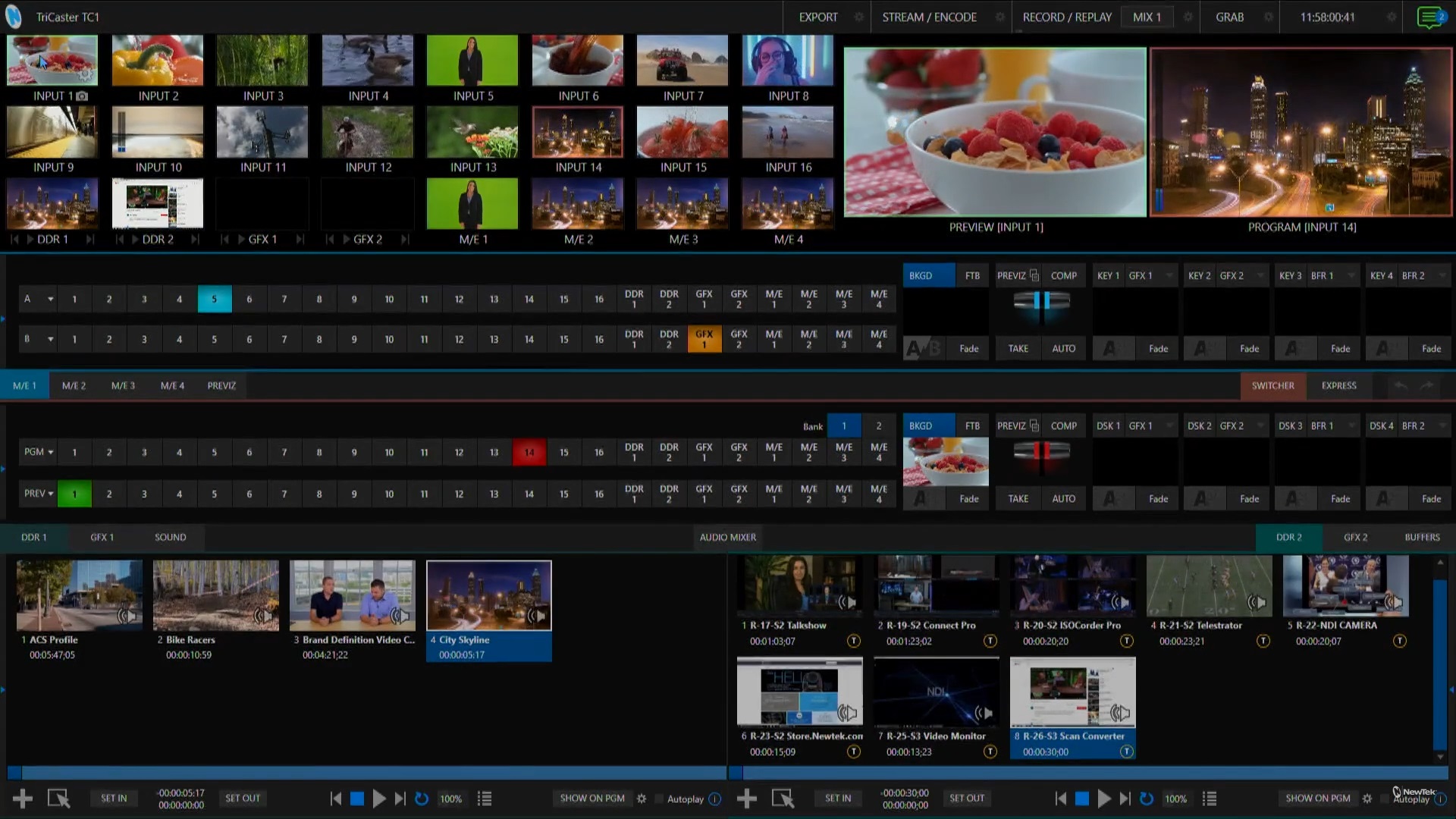 The interface is divided into many working areas, and some of these areas also toggle between functions or media locations. Our presenter steps through those areas and shows some of the options. 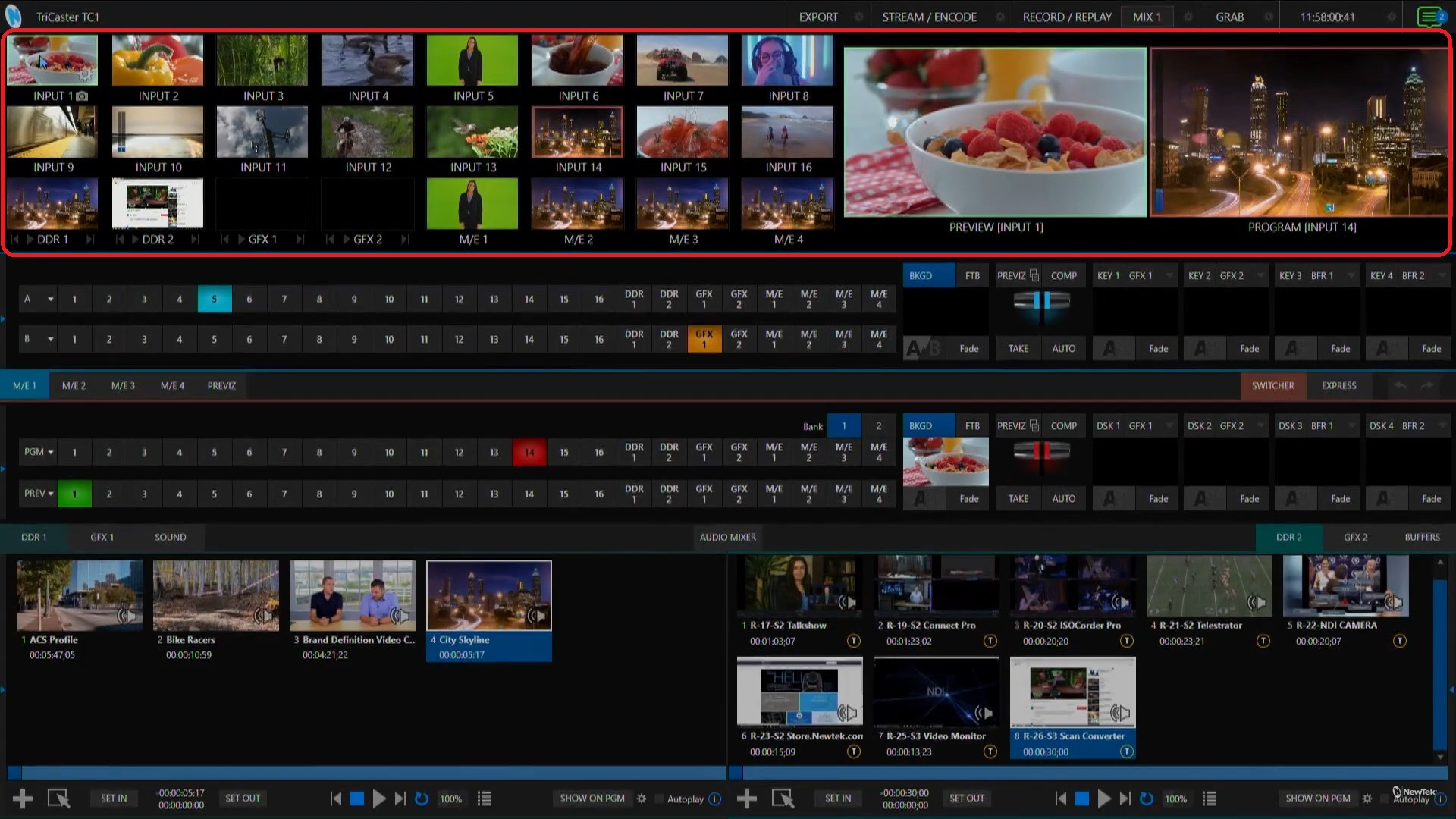 In the default configuration, the top section of the screen is the Multiviewer. From left, we have 24 thumbnail virtual monitors, then the larger Preview monitor and Program monitor.

Sixteen of the thumbnail monitors display the 16 external inputs available for production. These can be any combination of physical inputs using traditional 3G-SDI cabling to the TC1 and additional input modules, and NDI inputs via the network connections to the TC1.

Four of the thumbnail monitors show the content in the video and graphics media players, and the final four display the output of the four Mix Effects (M/E) buses available in TriCaster TC1. 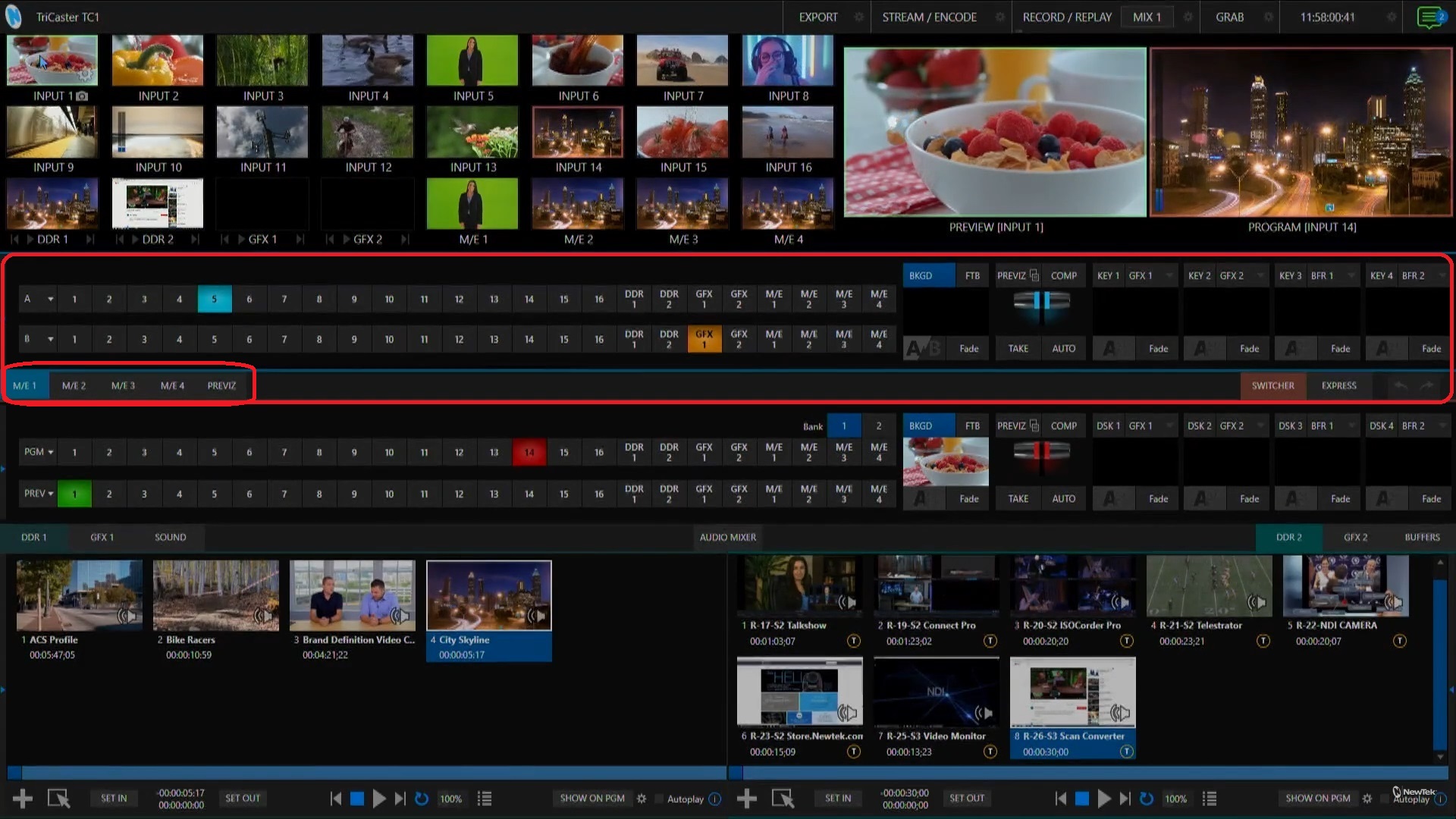 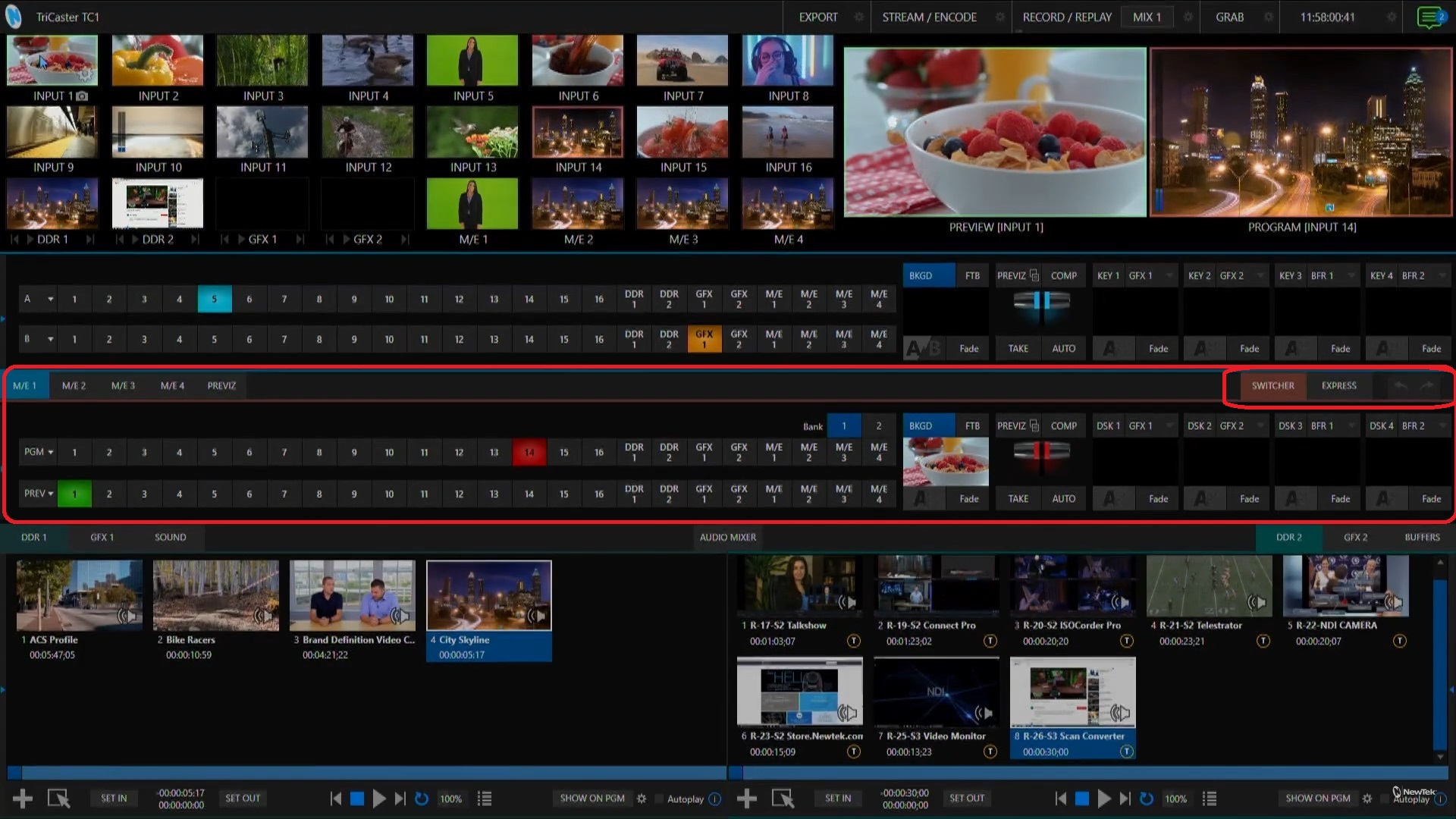 Here, the Main Switcher control section is circled. On the left are buttons that select between the full Main Switcher interface that we are seeing in these images, and a simplified “Express Switcher” interface. Left of those buttons are the Undo and Redo buttons. 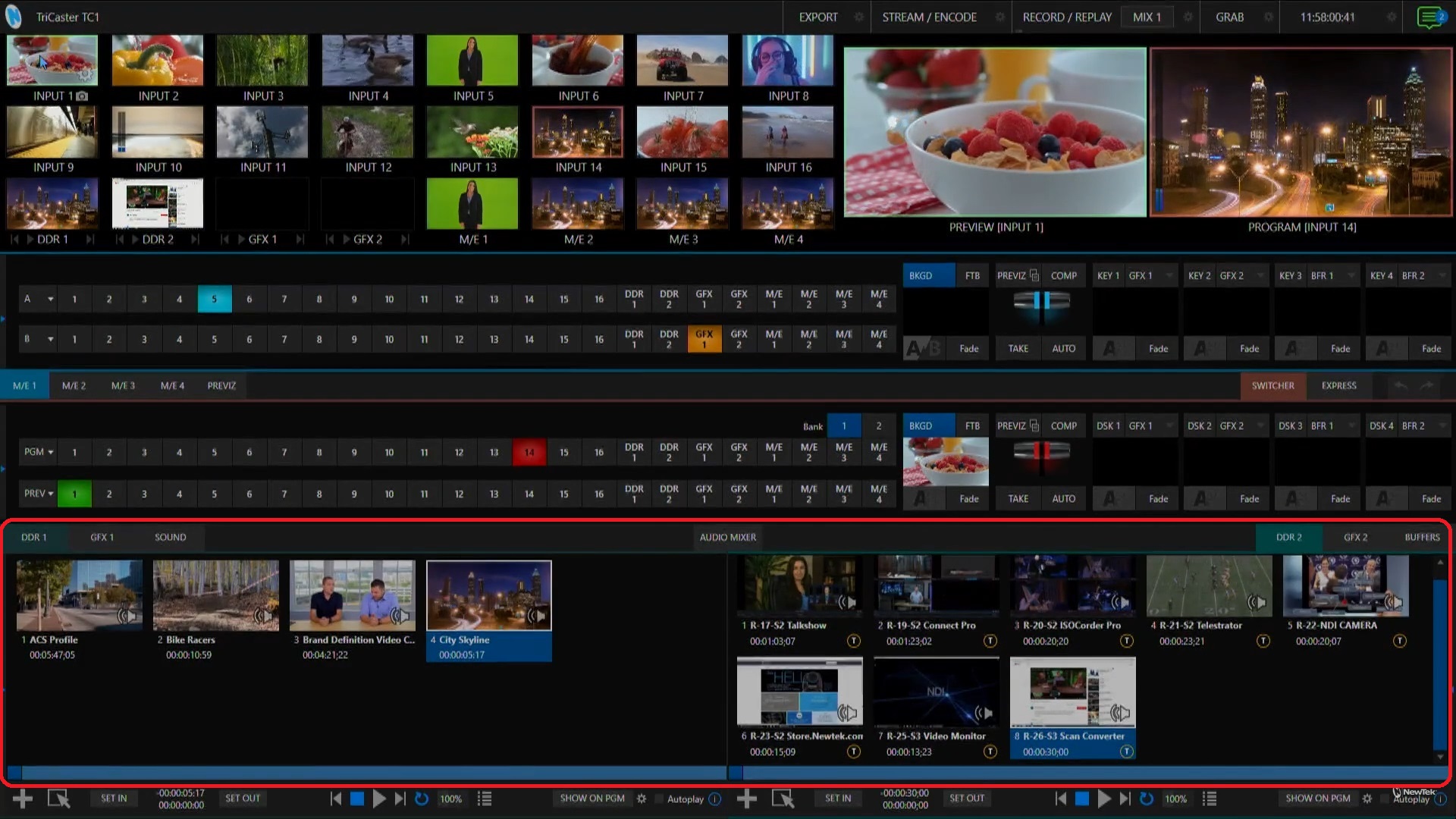 Next down are the Media Bins, which are used to manage several types of content. Two bins are present and each can be cycled through Media Players for video files (DDRs), Graphics (GFX) and audio files (Sound). Toggles for moving through the types of bins for the left bin are far left, and for the right bin are far right.

The row containing the toggles for the media bins also has a toggle in the center to switch the view for this portion of the UI to the Audio Mixer. This is not shown in the video, but as you can see in this interface shot, there are 25 stereo channels available in total, including the Master output. 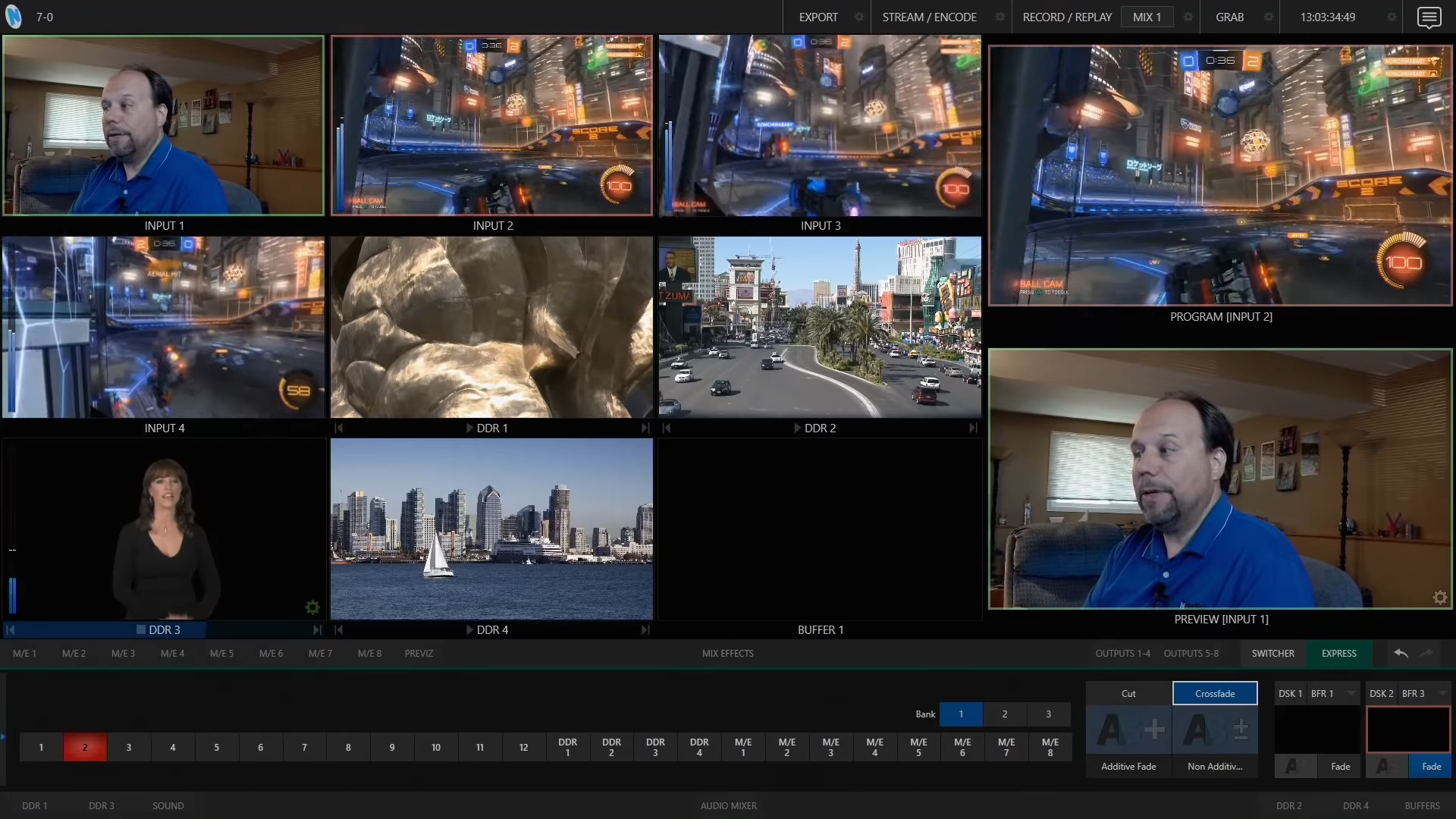 The interface is highly customizable to your production needs and preferences. After showing the Notification Center, our trainer steps through how various sections can be collapsed entirely, and the user can choose from a variety of configurations for the multiviewer in the resulting available space. The Express Switcher is not seen in the video but as you can see in the image above, it is the simplest possible switcher, just a Program row. The user can directly click on sources to cut from one to the next, but also has the ability to fade between sources, and two downstream keyers (DSKs) to overlay graphics.

Getting Started with TriCaster® TC1 Chapter 2: Setting Up