How To Input A Laptop Webcam & Mic Into TriCaster

iVGA and iVGA Pro are examples of the IP workflow offered in NewTek video production products for many years now; both enable a networked computer (Mac or Windows) to act as an input source for a TriCaster on the same LAN.  If you are not familiar with using iVGA Pro with your TriCaster, you might want to take a few minutes to watch the training video for using iVGA with TriCaster 40 - the same steps would apply to other TriCaster models.

However, for this ability to work, the audio card on your system needs to support a feature called “audio loopback.” This is where the sound from your computer is sent back into itself as a recording device. Some audio cards have this feature, usually called “Stereo Mix” or “What U Hear,” that shows up in your recording devices. If your computer has this device then you might not need anything else. Just tell iVGA Pro to use it.

However, many audio cards do not offer this feature.  There are several ways to solve this:

1) If you have a system in which you can replace the audio card, buy a card that has this feature.

2) If your system offers separate outputs and inputs for audio, you may be able to use audio patch cables to route outputs back to the inputs.  Not all systems will work with this setup.

3) One option that can work for almost any system is to use VB Cable, a software driver you install on your computer that adds a playback device (i.e. sound card) and recording device (i.e. microphone) that are “connected” inside the computer. Anything that is sent to the VB Cable Input device will automatically be received by the VB Cable Output device. This solution uses no cable (so it can’t be accidentally unplugged) and it doesn’t use any of the physical ports on your computer, which also means that you stay digital though the entire process. 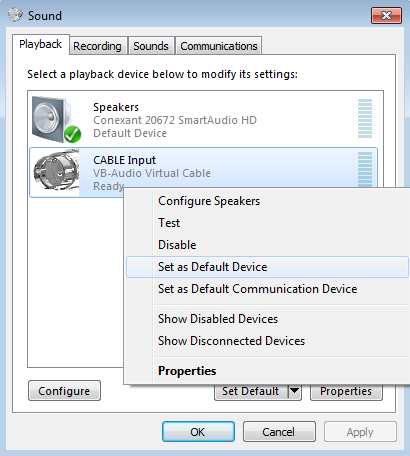 You are going to set your computer’s default playback device to the “CABLE Input.” This will route all audio to this sound card. You can do this by right clicking on the speaker icon found in the tray by the bottom right corner of the screen. Under the Playback tab, find the entry called “CABLE Input,” right click on it and choose “Set as Default Device.” A green checkmark will appear next to this entry.

When the computer is set to use VB Cable Input as the sound card, you will not hear audio come out of the computer speakers. This is normal. 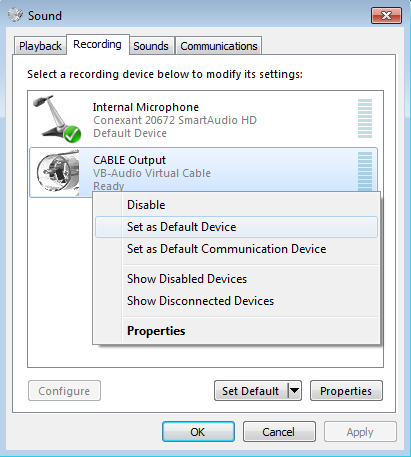 Next we need to set our default recording device to the VB Cable Output.

In the same window, choose the “Recording” tab. You will see a list of all of the recording devices available on your system. Right click on the device called “CABLE Output” and choose the option called “Set as Default Device.” Once you have done this, there will be a green checkmark on the “CABLE Output” device.

Now the VB CABLE Input is receiving audio, this will automatically go to the VB CABLE Output and that is what we set iVGA Pro to use for its audio source. 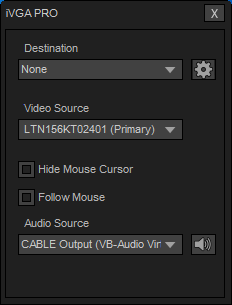 Now run iVGA Pro. At the bottom of the window, choose “CABLE Output” as the Audio Source.

Once that is selected, iVGA Pro will get its audio from VB Cable. Connect iVGA Pro into a TriCaster NET input. Now play something with audio on your system to make sure that TriCaster is receiving the signal. You will see the video and hear the audio from your computer in TriCaster.

You are ready to use iVGA Pro with your computer audio!

When you are finished using iVGA Pro, you can set the default audio settings back to your Speaker and Microphone to get audio out of your soundcard like would normally happen.

Internet Explorer 9 appears to play video/audio in sync better than some other browsers when using VAC. So if you are looking to play YouTube or other Flash clips though iVGA Pro and are running into sync issues, give IE9 a try.

Windows Vista and 7 have the ability disable the Aero display which will increase performance of iVGA Pro. Windows 8.x and 10 cannot disable the Aero display, this can degrade iVGA Pro performance on these systems, one of the first noticeable aspects of this performance decrease will be with audio. On Windows 8.x or 10 systems, if you have poor audio quality coming from iVGA Pro, use the “Region” option as your “Video Source” and grab a smaller area of the screen.

You can also try changing the iVGA Pro image quality (by clicking on the gear icon) to help with reducing the bandwidth to keep up the audio quality and the frame rate.

Make sure you set the VB Cable as the Input and Output audio defaults before starting iVGA Pro. If iVGA Pro isn’t receiving the audio you need to fully quit iVGA Pro (by right clicking on its icon in the tray and choose Exit). Then start iVGA Pro again.

If you have NLE software (like SpeedEDIT) on your system, put the video in full screen mode and you basically have another DDR feeding into your TriCaster - and it has the power of a full non-linear editing system behind it!

Find an application that doesn’t work with our Audio Loopback script?

In Skype’s “Tool” menu, select “Options.” In the window that opens, select “Audio Settings” on the left side.

Under Speakers, choose “Cable Input.” This will tell Skype to use this device. You will need to manually change it back if you want to use Skype without VB Cable. 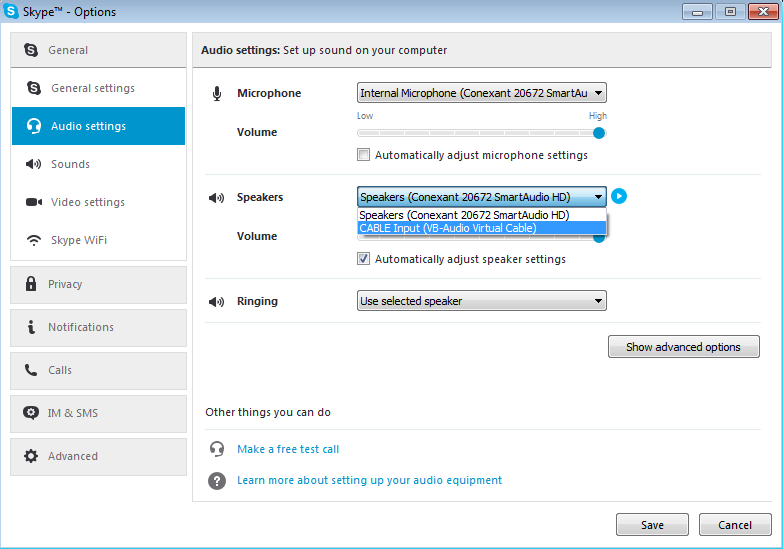 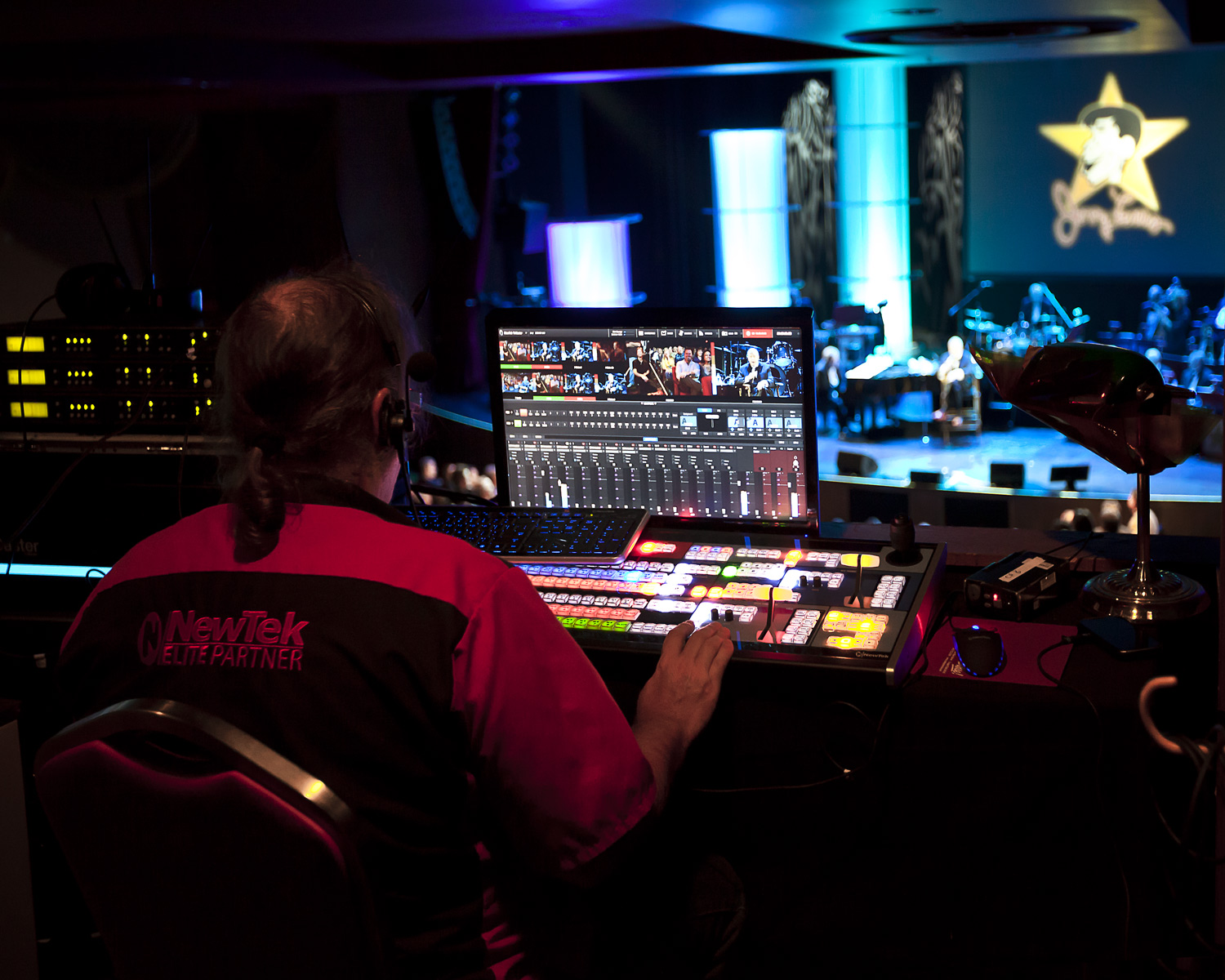 How to Output to the Network with TriCaster 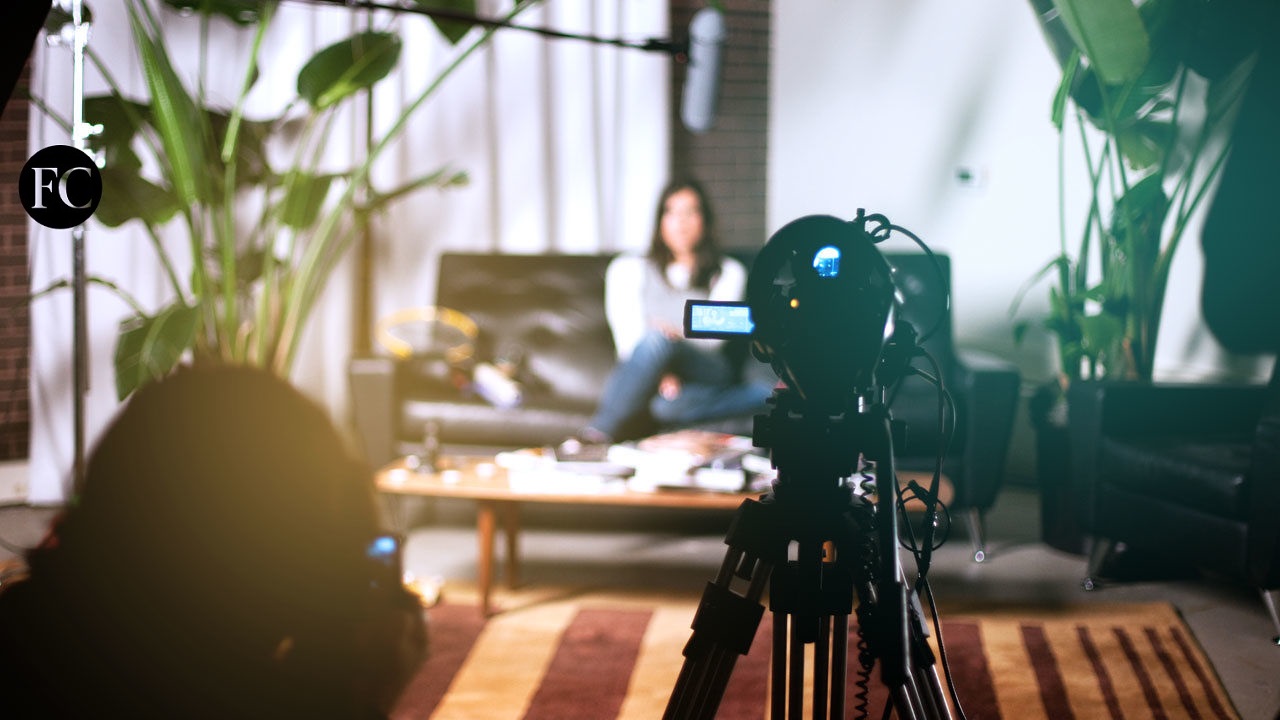 How To Be Great on Video