This article will cover details you need to know to plan for live streaming, whether from a standard TriCaster or one upgraded to include the TriCaster Advanced Edition. You’ll learn everything you need to know in terms of framerates, CDN (Content Distribution Networks), multi-tier fallback Internet connections, and how to reach more viewers and attract different audiences by live streaming to multiple platforms and services simultaneously, thanks to the optional TriCaster Advanced Edition.

Live webcasting to the general public has expanded and transformed the world of television. Now a live video broadcast can be shared to worldwide audiences with a relatively tiny investment. The live webcasting market also brings us many creative and moneymaking opportunities. With its built-in encoder, the NewTek TriCaster acts as the first required element, but there are many other details to take into account, so I wrote this article to prepare you for them.

Sections in this article

I have gone into great depth about spatial resolution, temporal resolution (framerates) and interlaced versus progressive in other articles, including the very recent What’s the Best Camera for My Live TV Studio. In this article you’re reading now, I’ll keep it as short as possible for the purpose of live streaming, so unlike that one, here I’m purposefully excluding film framerates and extinct television framerates that stopped being used in 1953.

If you produce for a 1080HD channel; if your program has less movement (i.e. talking heads), then you have the option to produce programming in 1080p (even though for live streaming, you may reduce it to a lower spatial resolution like 720p. In other words, you can produce and record at 1080p for later on-demand playback and stream in a lower one):

If you live in a PAL or ex PAL country, 25p will be an excellent option for you. If you live in an NTSC or ex NTSC country, you could save on bandwidth (or have less compression per frame with the same bandwidth) by using 23.976p. That’s what I would do in an NTSC or ex NTSC area if it were mainly a “talking head” show, with very little movement. Also, all of these framerates are compatible with all important web services and with all recent mobile phones and tablets. The important detail from the last sentence is framerates. For some tablets or phones that aren’t so recent and whose screen resolution is lower than 1920x1080, it will be necessary to “scale” or reduce the number of pixels, which is done automatically with many online video services. Fortunately, as opposed to temporal resolution, spatial resolution (pixel count) is very scalable without affecting the visual look. It just fits perfectly on different screen sizes with different spatial resolutions.

If you produce programs for a sports over-the-air TV channel, it’s very likely that the channel has chosen to work with 720p, since that system favors temporal resolution due to the fast movement, with a mild sacrifice in spatial resolution. So if you’re producing material for a PAL or ex PAL sports TV station, you’ll be best served by producing 720/50p, which can also be expressed as 720p50. On the other hand, if you’re producing material for an ex NTSC sports station, you’ll be best served by producing 720/59.94p, which can also be expressed as 720p59.94. However, if you plan to webcast your signal, either live or on demand, —or if you plan to distribute it some other way so it reaches mobile devices (i.e. tablets and phones)— you should keep in mind that up until now, there are great limitations of high framerates (50p or 59.94p) to those destinations. It’s true that YouTube and YouTube Live are (to my knowledge) the first to offer 59.94p for the web (Livestream and Vimeo still limit us to 29.97p maximum… If you send 50p or 59.94p to Livestream or Vimeo, they’ll drop every other frame), there’s another problem that is probably even more critical: The majority of tablets and phones have the same limitations of 30 frames per second. Even the brand new iPhone 6s and iPhone 6s Plus limit playback on the internal screen to under 30 frames per second. If you create material at 50p or 59.94p, those devices will end up playing half: 25p or 29.97p. Your viewers that see it on those devices that are limited to 30 fps will see something quite different from what they’ll see on TV sets or computers… or on some very recent tablets and phones. They won’t only see half of the framerate: The vital relationship between framerate and shutter speed will be lost, and hence it will have an inconsistent look. So for sports TV production, we have to decide what’s most important: maximum fluidity on TV sets (50p or 59.94p) or visual consistency across all devices, large and small, at 29.97p, 25p or 23.976p (depending upon availability in your TriCaster model and in your cameras).

If you have heard of “720/60p” or “720p60”, it’s very likely that the original source of the information was rounding it up from 59.94 to 60, either intentionally or innocently. In fact, at publication time of this article, that’s the case even in the menus in NewTek TriCaster products. So you now know that NewTek, some camera manufacturers, and even some TV channels often round the number for simplicity or space sake. Integer numbers like 30.000 and 60.000 really haven’t been a television standard since the United States colorized the monochrome system back in 1953. However, some innocent engineers and even camera manufacturers have fallen into the trap of taking those rounded numbers literally (for example, the Canon 5D MKII camera, before a firmware update, supplied exactly 30.000 frames per second, which caused lots of problems, since it was non-standard.)

To webcast live to the entire world with your TriCaster (or any other system), you require a very good Internet connection where you are so you can send an ideal audio/video signal to your CDN. 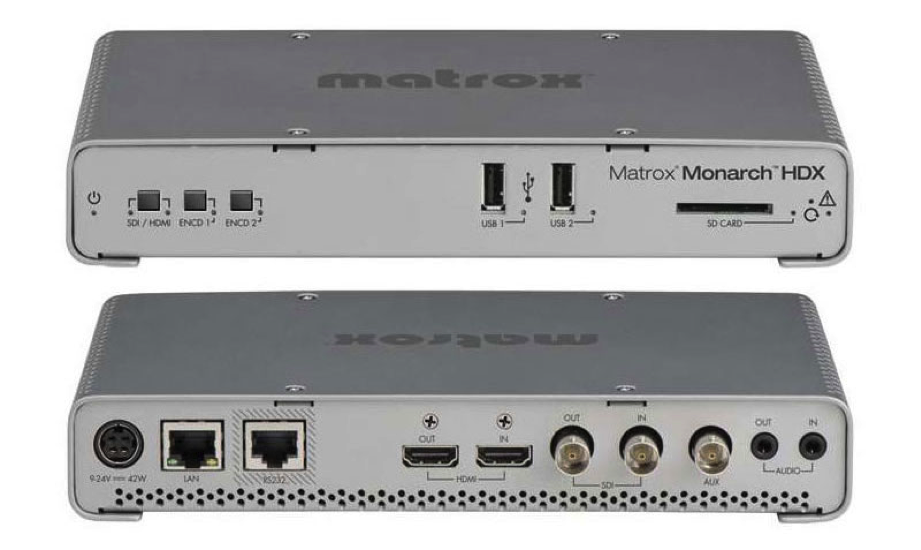 Above is an example of the Matrox Monarch HDX streaming encoder, which accepts either HDMI or SDI input. It can also make an H.264 recording on an SDHC card, and that recording can be at a higher bitrate than the live streaming setting. This can be useful as a backup recording of the one made in your TriCaster.

Some CDNs even allow you to initiate simultaneous connections with each encoder and ISP, with a fallback priority order assigned by you. Some ISP examples in the United States might be prioritized as follows:

If you are concerned about having a mission-critical live webcast, then you must consider several possible potential points of failure:

In my experience and that of my colleagues, there is a higher probability of an electrical power failure or a local ISP failure than a TriCaster failure, so if I were you and needed a semi-mission critical webcast, I would prioritize the standby electricity and additional simultaneous ISPs, together with standalone encoders for each. If your encoders and TriCaster use HDMI, then you’ll need an HDMI distribution amplifier to feed each encoder. Likewise, if your TriCaster and standalone encoders use SDI, you’ll need an SDI distribution amplifier to feed each encoder. Either distribution amplifier will divide the digital audio/video signal for each independent encoder.

You must always seek the upload connection speed to match or exceed the largest resolution format you’re going to stream, since your chosen CDN —with adaptive bit rate— will be creating the smaller versions for you automatically. In the following budgetary examples, I am using the numbers recommended by the CDN called YouTube Live, not because I want to favor it, but because it’s the only one (or one of the few) that currently offers 59.94 progressive frames per second. That way we can be conservative when budgeting bandwidth, since the other CDNs will likely recommend similar values if and when they offer that framerate, and if and when you ever decide to stream a high framerate like 50p or 59.94p. (Earlier in this article, I warned about the limitations of high framerates of most tablets and mobile phones, most of which cannot play more than 30 frames per second.):

Also, all of the bandwidth numbers mentioned so far refer to the live encoding for live streaming. The ideal encoding for on-demand tends to be much less compressed. For example, for 1080p on demand to be uploaded to a service like Vimeo Pro or YouTube, I recommend a minimum of 20,000 kb/s knowing that they are going to recompress it for each size.

If you purchase the optional TriCaster Advanced Edition for your TriCaster, you’ll be able to publish highlight video clips and stills to multiple social networks simultaneously, while you continue to record and broadcast live. In fact, you can even do it to multiple accounts to which you have access in any given social network, so for example, you can publish them simultaneously to your personal account, your TV station’s account, and the account that belongs to one of your advertisers. Those social networks can include Facebook, Twitter, YouTube and more.

Born in Connecticut, United States, Allan Tépper is a bilingual consultant, multi-title author, tech journalist, translator, and language activist who has been working with professional audio and video since the early eighties. Since 1994, Tépper has been consulting both end-users and manufacturers through his Florida company. Via TecnoTur, Tépper has been giving video tech seminars in several South Florida’s universities and training centers, and in a half-dozen Latin American countries, in their native language. Tépper has been a frequent radio/TV guest on several South Florida, Guatemalan, and Venezuelan radio and TV stations, and he currently conducts the CapicúaFM radio program. As a certified ATA (American Translators Association) translator, Tépper has translated and localized dozens of advertisements, catalogs, software, and technical manuals for the Spanish and Latin American markets. He has also written contracted white papers for manufacturers. Over the past 18 years, Tépper’s articles have been published or quoted in more than a dozen magazines, newspapers, and electronic media in Latin America. Since 2008, Allan Tépper’s articles have been published frequently —in English— in ProVideo Coalition magazine. More info at AllanTépper.com

NewTek sponsored this article after receiving Allan Tépper’s proposal. As of the publishing date of this article, Allan Tépper has no commercial connection with Akamai, AT&T/U-verse, Comcast/Xfinity, Facebook, Livestream, Matrox, Microsoft Azure, Sprint, T-Mobile, Twitter, Verizon, Tally Lights LLC, Twitch.tv, UStream or YouTube other than that some of them have sent him review units or have contracted him to do consulting, technical writing or translations in the past. The words and opinions of Allan Tépper expressed herein are his own. 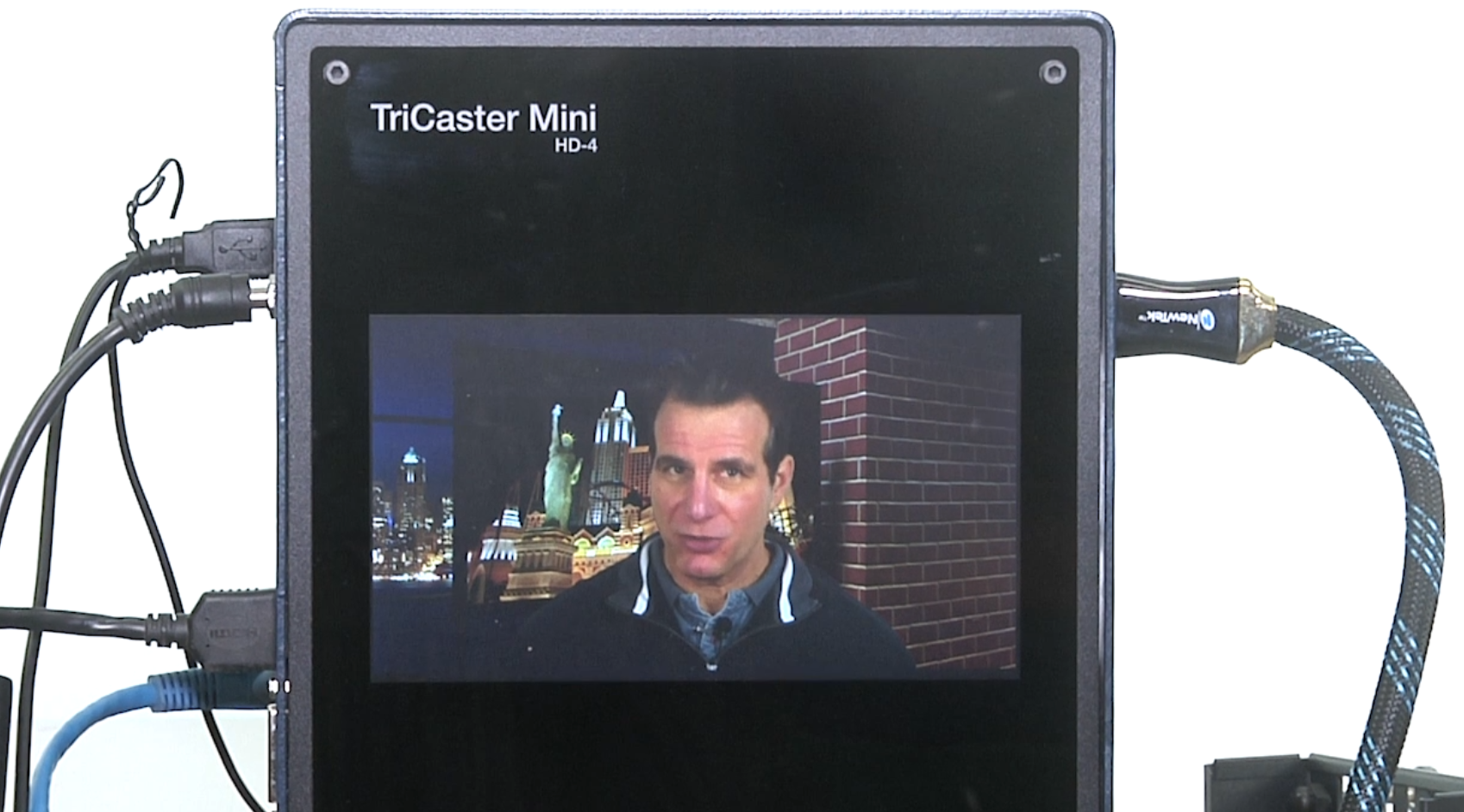 How To Produce Multi-Camera Video With TriCaster Mini