SYDNEY, AUSTRALIA
Damn Good Productions, an Australian–headquartered video production company known for its high–profile clients in the corporate and entertainment markets, was hired by American technology company Pitney Bowes to reimagine its 2021 annual live kick–off meeting as a live virtual event for its, Japan, Australia, and New Zealand region.

Because of Damn Good’s long experience with NewTek TriCaster® and NDI®-based products, the company was able to seamlessly pull together a live broadcast–quality virtual meeting that featured simultaneous English and Japanese program feeds together with real–time multi–lingual translations. The event included presenters in studio, multiple pre–recorded playouts, supers, graphics, a host in a green screen studio with a custom designed virtual set, and sessions with up to six Skype panelists at a time.

With offices also in the UK and the USA, one of Damn Good Productions specialties is video production for large corporate meetings. With a background in live television broadcast, high production value that excites and motivates audiences are hallmarks of the Damn Good brand.

That’s why, since their founding in 1988, they have been early adopters of production technologies that can deliver outstanding value for their major corporate accounts. In 1998, they became one of the first companies in Australia to produce a live stream and they have relied on NewTek products, especially TriCaster, since 2012.

With this broad NewTek arsenal, they were particularly well–positioned to respond as their clients gravitated to live streaming over the past year. That’s why Pitney Bowes chose Damn Good to produce their annual start–of–the–year event for Japan, Australia, and New Zealand. 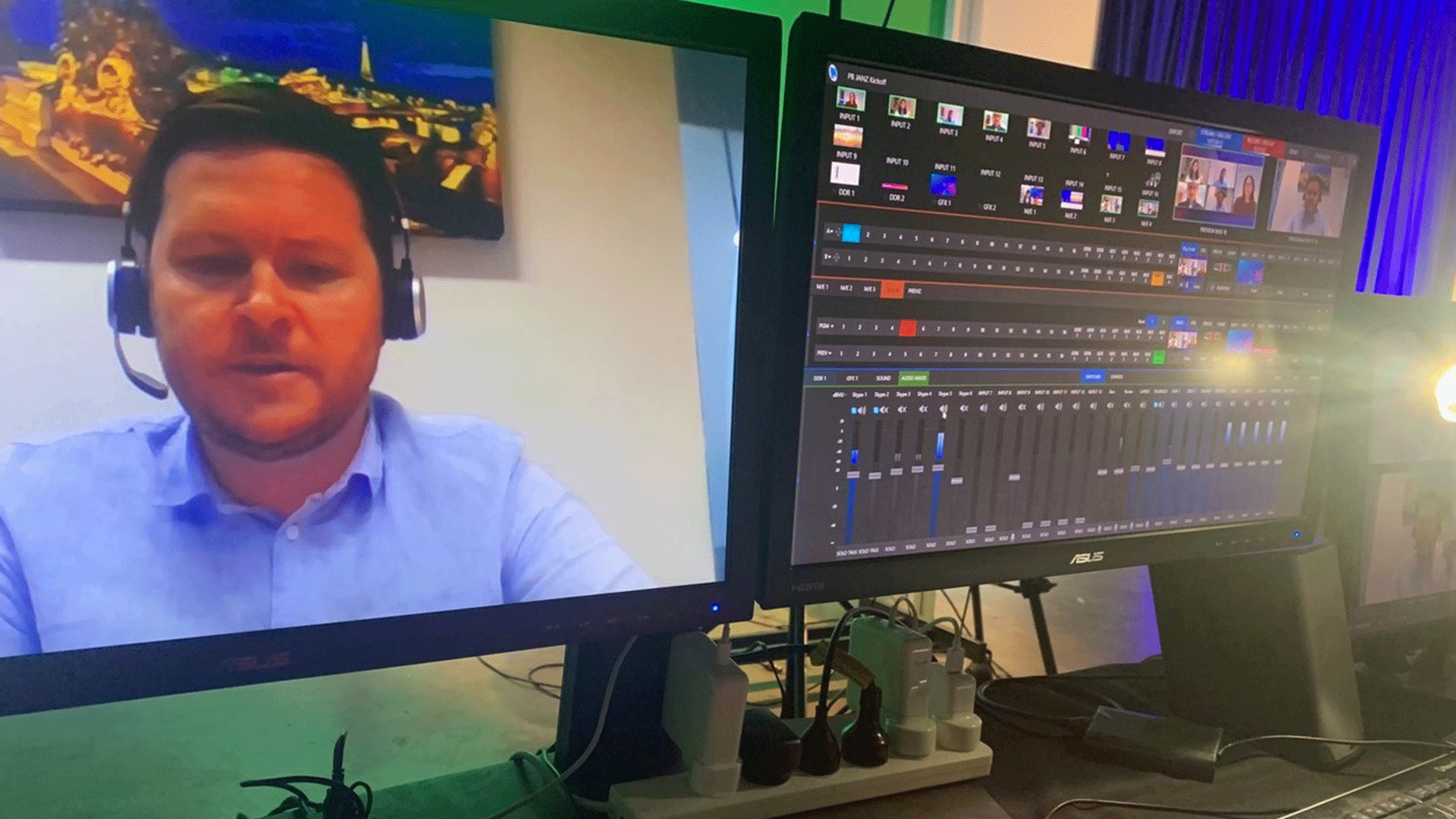 According to Aye Verckens, Marketing Communications representative at Pitney Bowes who worked closely with Damn Good, “When we first approached the team at Damn Good, we had no idea how our first region–wide virtual event would work–and we were thrilled with the end result. Our event was like a television broadcast rather than a virtual meeting. We were impressed with how easy it was to join presenters from the US, Japan, and New Zealand with our hosts in Australia, and we also appreciated how seamless it was to produce simultaneous streams in English and Japanese. Most importantly, the audience was engaged throughout.”

Ben Alcott, Damn Good’s Managing Director agreed, “The event was a huge success with participants calling it ‘particularly engaging.’ Due to the complexity of the production components, it simply wouldn’t have been economically possible without NewTek products. This event has opened up production possibilities from Pitney Bowes businesses globally, at a tenth of what they were spending previously.” 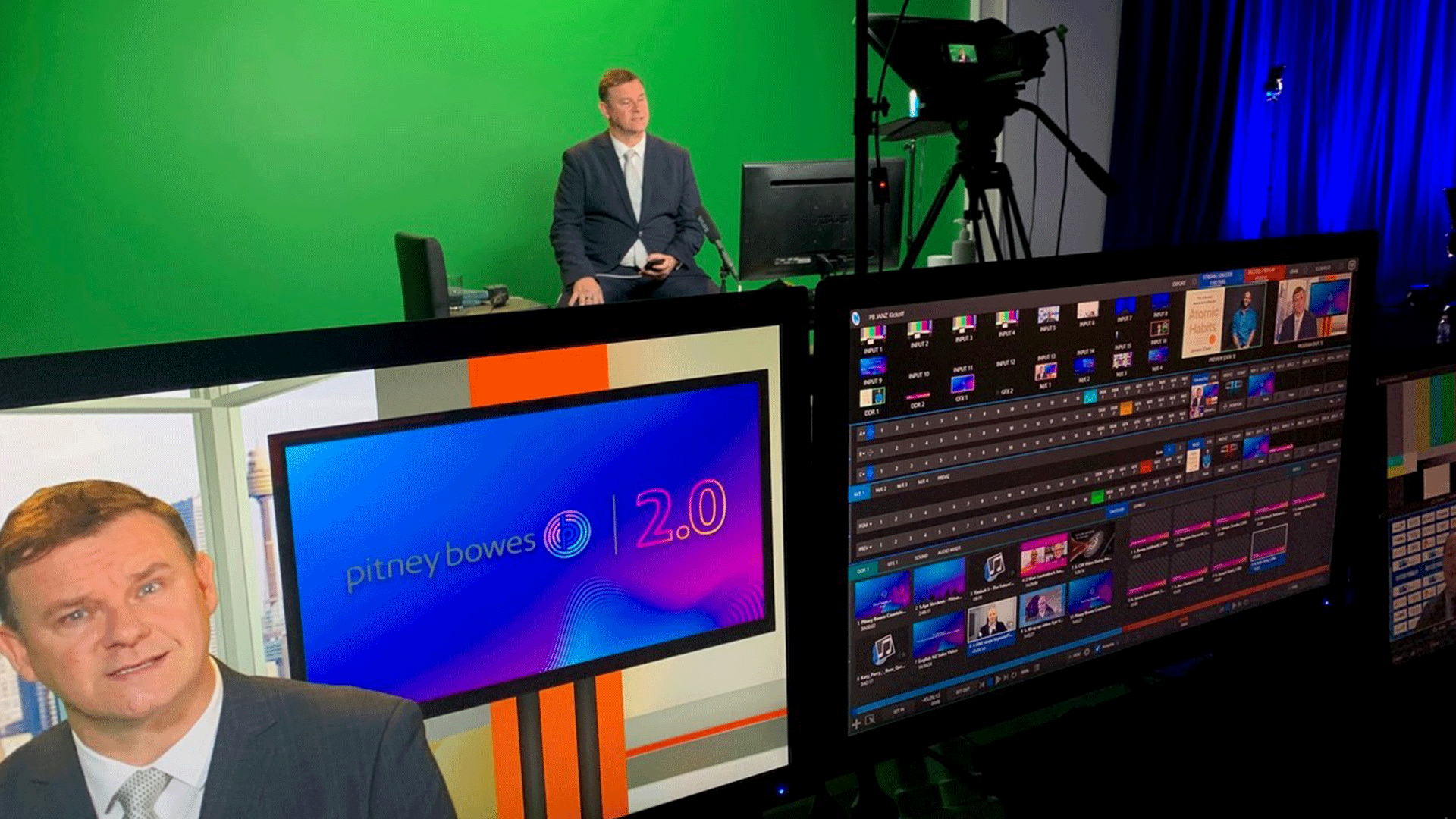 Seamless Integration of Multiple Programming Streams
NewTek technologies were critical to making the integration of live video and streaming work together seamlessly. The main program presented in English, was anchored by an MC in a green screen studio using TriCaster’s virtual set technology. Corporate presenters were in another studio covered by three NewTek NDI PTZ cameras. All inputs were fed to a TriCaster TC1 that switched and streamed the main program. NDI is a free–to–use software technology developed by NewTek that allows video, audio, and metadata signals to be shared bi–directionally over standard Ethernet IP networks. NDI was used extensively for the project.

The presenters’ English slides flowed into the TriCaster TC1 from a MacBook Pro laptop via NDI Scan Converter, a free downloadable software tool. Up to six remote panelists were combined utilizing the TC1’s two internal Skype channels along with four additional Skype channels from a NewTek TalkShow® VS4000. Since English and Japanese presenters were speaking simultaneously on Skype to different audiences, TalkShow feeds back to the presenters were easily re–routed via NDI depending upon the language of the speaker.

A third TriCaster 460 with Advanced Edition software took a feed from the Japanese breakout participants, again via NDI Scan Converter, and added an English translation. This was streamed out as another translation channel. 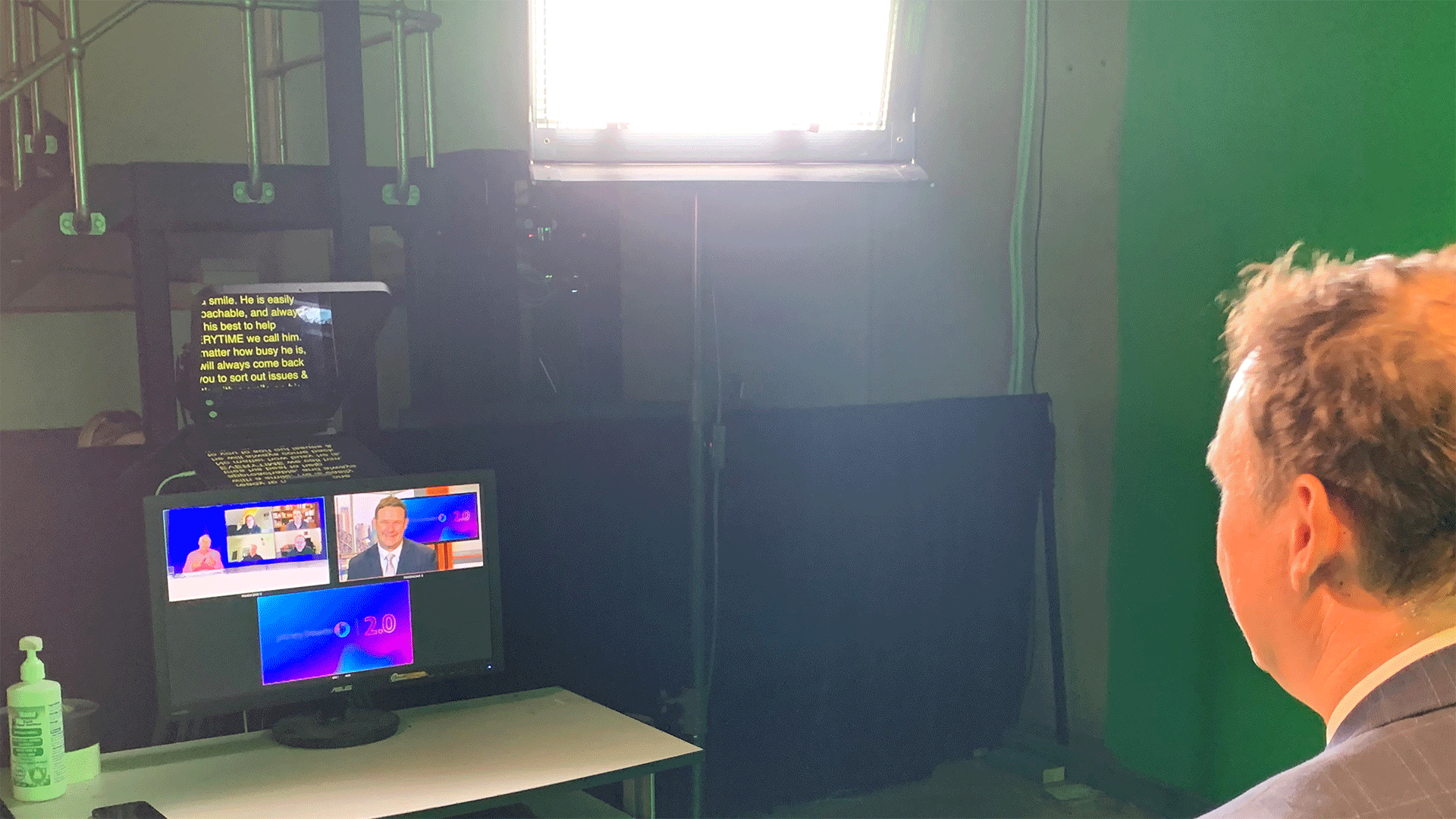 NDI® Studio Monitor Adds Flexibility
Translators were set up with displays receiving the NDI Studio Monitor feeds which allowed them to monitor Skype feeds from both TriCaster TC1 and TalkShow–anything that required their translation. Clients also used NDI Studio Monitor so they could view the different outgoing streams.

Must Haves
To satisfy the client, the live event had to include:

At one stage during the event, one of the on–screen presenters suddenly asked the production team to show “behind the scenes” shots live on air. With only seconds notice, the director downloaded the NDI–HX Camera for iPhone app, and then selected it as an input on the main TriCaster. The app even showed a tally when selected as a live input! 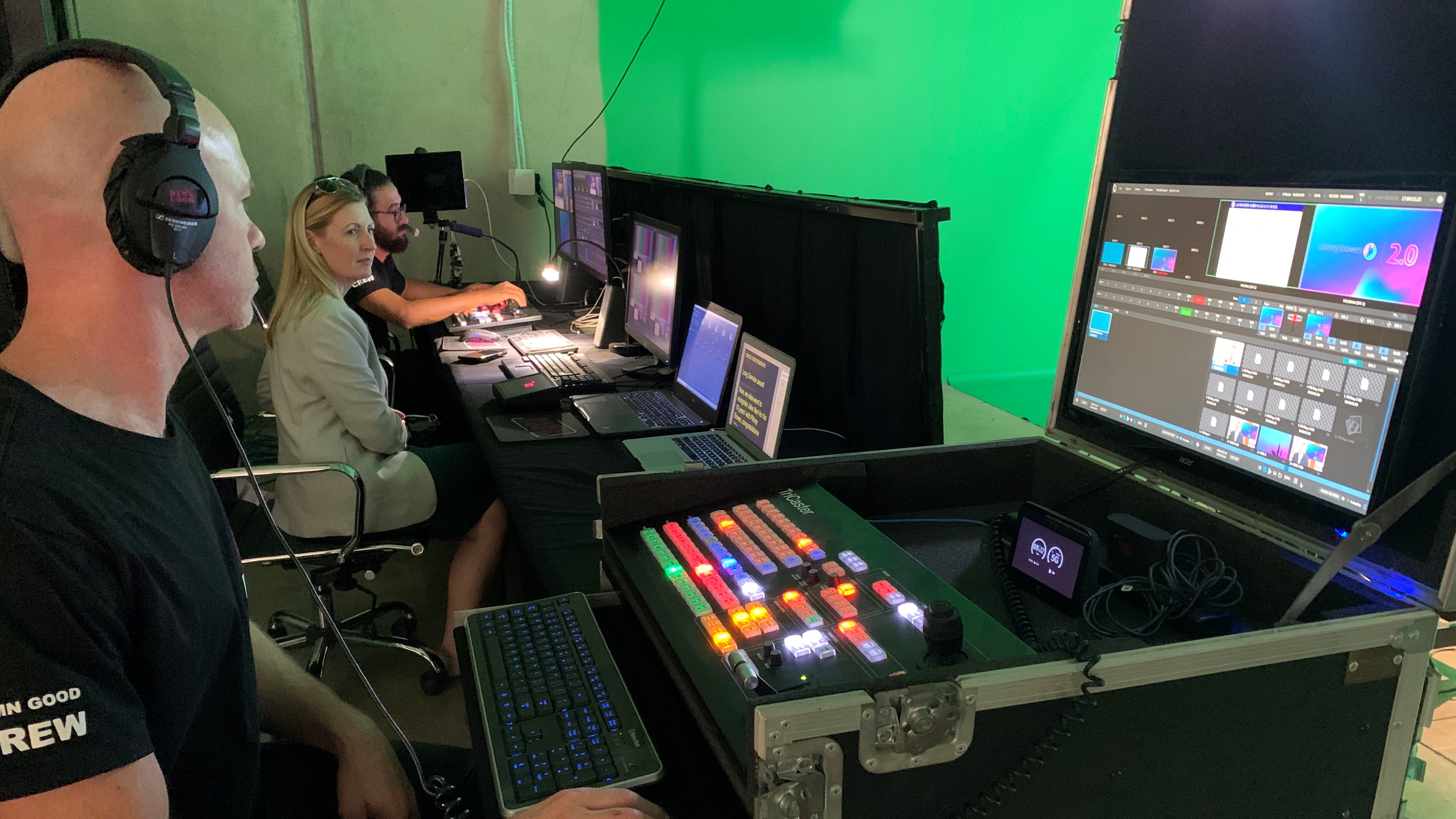 GET A COPY OF THE CASE STUDY 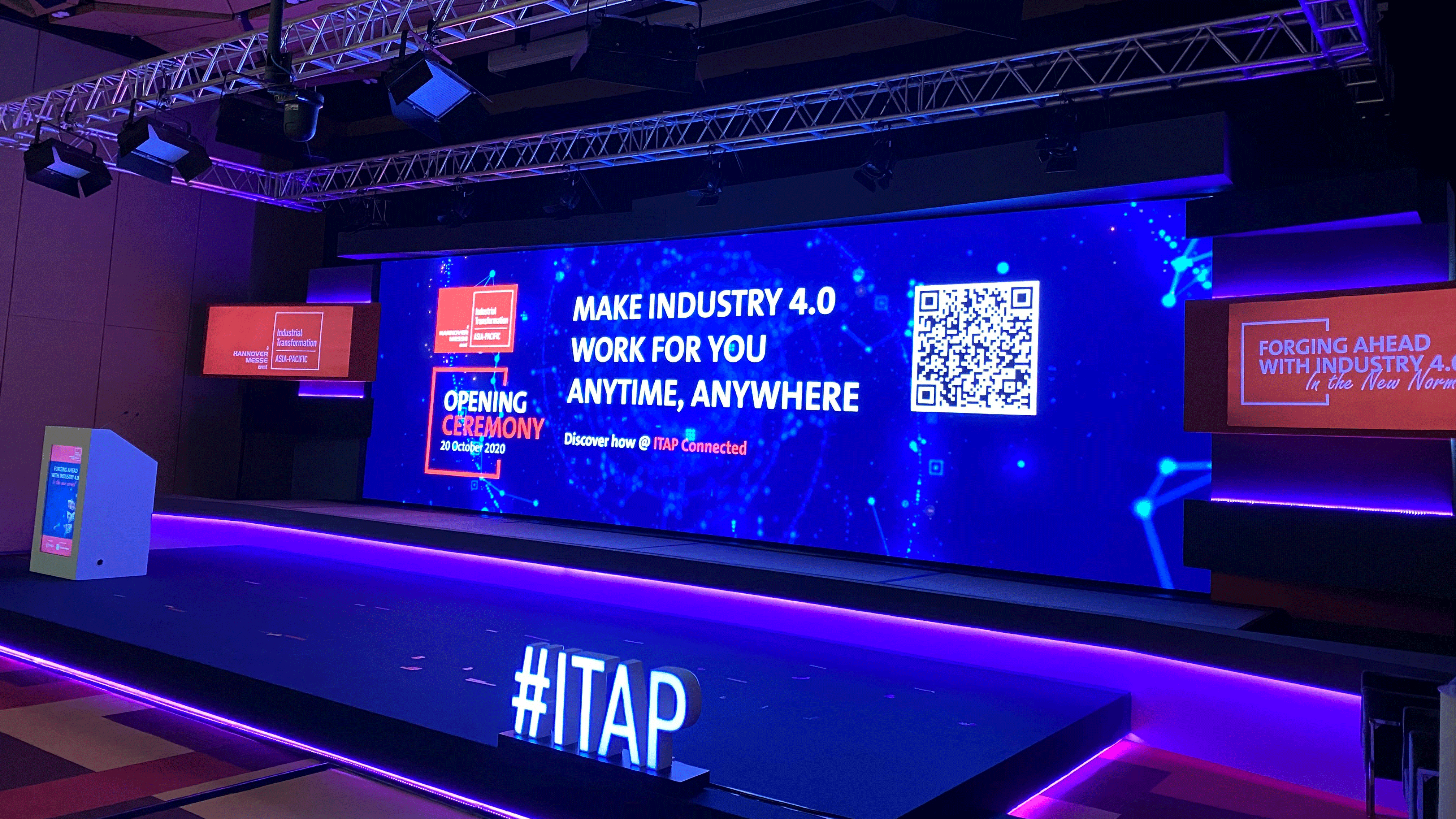